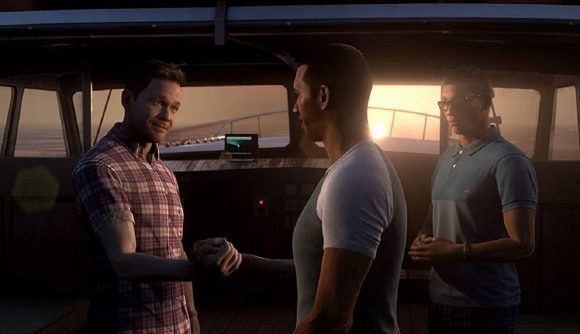 Any proud owners of The Dark Pictures Anthology: Man of Medan can now bring a friend along for a play-through for free with the complementary Friend’s Pass.

Announced on Steam amid a bigger update, the pass is good for one go around of Man of Medan through the Shared Story co-op mode. Valid until January 6, 2020, the voucher requires the owner to have the latest version installed. Once the game is updated and launched, a window will open with the Friend’s Pass key. From there you copy the key and send it to whomever you want your partner to be. They then redeem the key through Steam as normal, which gives them access to one co-op play-through with whomever sent it to them. The key is one use only, once it’s done, it’s done, so pick wisely.

There’s a handy video below of the full process if you get confused at all, and Steam has a step-by-step breakdown for further guidance.

Along with the Friend’s Pass, there’s also the Curator’s Cut, a Man of Medan Director’s Cut of sorts that was previously a pre-order exclusive. It contains “alternative scenes and perspectives” that aren’t in the base game as is.

The Dark Pictures Anthology: Man of Medan is the first chapter in the titular horror anthology from Supermassive Games, an ongoing set of narrative adventures of terror. The next installment, The Dark Pictures: Little Hope, is coming at some point next year.

If the Friend’s Pass wasn’t enough, Man of Medan is currently 40% off in the Steam autumn sale, a good deal even if you’ve nobody to play with. You might also want to check out our best free PC games list for more bargains.