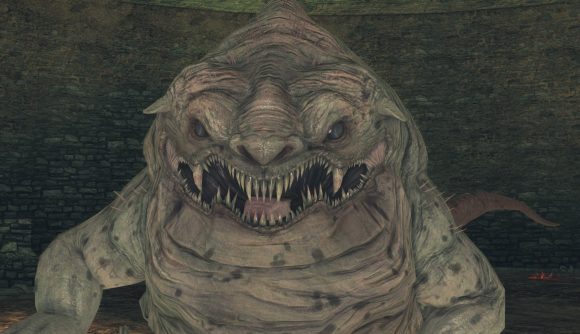 It’s no big surprise that developers have internal naming schemes for the characters in the games they’re working on, but something about the Dark Souls franchise inspires a kind of reverence – each major enemy (and many of the minor ones!) have reams of lore behind them, and so it’s amusing to learn that FromSoft’s developers seem to have created in-house nicknames for them based on other pop culture franchises.

Not to demystify things too drastically or anything, but that is indeed what seems to have happened. Players scouring through the code for the original Dark Souls II on PC have unearthed several internal names for bosses, and the results are highly amusing.

Twitter user Meowmaritus posted a short thread of some examples. The Japanese kana for the Covetous Demon are pronounced jaba za hatto – or, Jabba the Hutt. That’s a pretty fitting nickname for old Covetous, who definitely has a Jabba-style body (and the face of one of those guardian dogs from Ghostbusters). Executioner’s Chariot, a boss who appears in Undead Purgatory in the Scholar of the First Sin edition of Dark Souls II, was apparently nicknamed Silver Chariot after the character from JoJo’s Bizarre Adventure.

Here’s the start of Meowmaritus’ thread:

Starting off the discoveries with the internal name of Covetous Demon:

The big surprise here, though, is the internal nickname for Darklurker, a highly challenging boss that appears at the end of Dark Souls II’s Pilgrims of Dark covenant questline. In the game files, Darklurker is called Agdayne’s Stand – a reference to another character in the game, Grave Warden Agdayne.

What could that mean? Well, I haven’t played Dark Souls II, but I’m not sure that it matters – even people who have seem confused by this reference. But since it’s Dark Souls, it’s a good bet that it does mean something. Is Agdayne the Darklurker? Where’d the extra arms come from, if that’s the case? Is Darklurker the Mr. Hyde to Agdayne’s Dr. Jekyll?

In any case, it’s an interesting peek behind the curtain at FromSoft – at least we know a little more about what the developers there were watching while they were working on this legendary series.