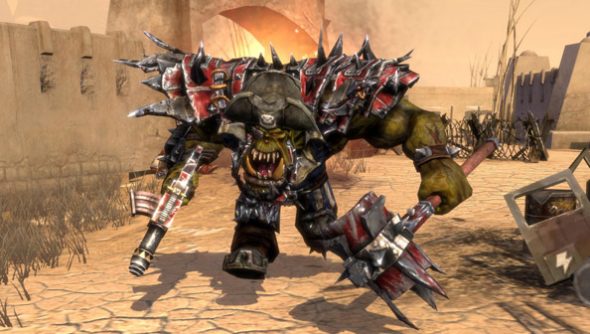 It’s been three months since Relic were snapped up by Sega just as the jaws of hell closed around THQ, and we’re still conducting a slow and slightly upsetting headcount to see how many of the developers’ best-loved names have made it out with them. Company of Heroes was reported “intact” just days after the publisher switcheroo was announced. Homeworld fared less well – the venerable space strategy series was lost in transit, returned to sender and, we learned yesterday, resold to a new and unlikely owner. Last but not least, probably recovered from a dank corner of a removal truck in a cardboard box marked ‘Catering’, is Dawn of War. Which, if Relic have anything to do with it, aten’t dead yet.

“There were certain properties that were attached to the sale of Relic initially, which was Company of Heroes, but not all of Relic’s initial IP was part of that initial sale package,” series director Quinn Duffy explained to Eurogamer.

“Dawn of War, because it’s a license and it’s owned by Games Workshop, they have the opportunity to work that license with whoever they want. I would hope it would be us again. We had a great working relationship with Games Workshop.”

Now that Sega is in the process of forging its own ties with Games Workshop via Creative Assembly’s fantasy Warhammer strategy game, Duffy reckons there’s a “strong possibility we’ll all be working together again on Dawn of War”.

Moreover, whatever shape a new Dawn of War might take – and Duffy isn’t telling – it’d be built on new tech.

“We’ve stopped and started on a number of things over the past that have given us lessons,” he said. “But sometimes it’s easier just to start again on something new.

“With Company of Heroes, when we started, we wanted to bring our level of tech up substantially. Going into the future, Relic’s got to do that again. We’ve got to get our next generation engine ready for years down the road. Whatever’s happening has to take that into account.”

When asked whether “whatever’s happening” might constitute a full sequel already in development, Duffy proved coy. “I won’t say…”, he smilingly replied.

The fruits of Games Workshop’s newly polygamous approach to Warhammer licensing have emerged over the past few months. Creative Assembly’s fantasy title aside, we already know that Slitherine are building a turn-based 40k game, and that Full Control are already hard at work on a Space Hulk adaptation.

If you were they, would you put the keys to the grim future back in Relic’s hands?