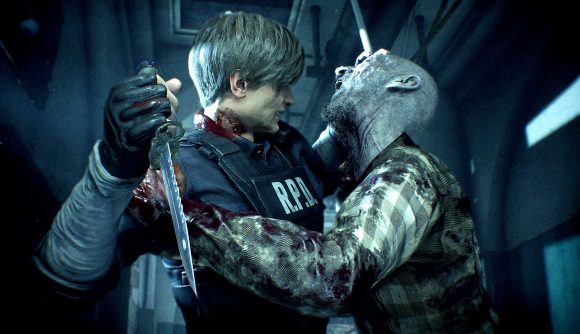 Dead by Daylight is doing something pretty special for its fifth birthday: the survival horror co-op game will run a Resident Evil crossover, joining in the celebration of the legendary horror franchise’s 25th anniversary. To mark the occasion, Dead by Daylight will add two survivors and a killer from the Resident Evil series, each with their own unique perks and abilities.

Jill Valentine, as she appeared in the Resident Evil 3 Remake, is the first new Resident Evil survivor. Behaviour Interactive says her perks highlight both her specialised military training and her resilience against impossible odds. Joining her is Leon Kennedy, taken from the Resident Evil 2 remake. His perks are also split between offence and support, and he’ll be able to spawn a flashbang that blinds the killer – that’s a perk he’ll always have, and he won’t need to equip the item before the match.

For the killer, Behaviour Interactive says it had a “lot of different material to choose from,” but ultimately it settled on the Nemesis-T type, who is just called The Tyrant in Dead by Daylight’s crossover.

The Tyrant’s power is to use his tentacle attack to infect survivors with the T-virus. This causes survivors to cough, vomit, and generally make themselves noisier and easier to find. They also become vulnerable to subsequent tentacle attacks, which will start causing damage rather than infection.

Fortunately, survivors who have been infected with the T-virus can search the level to find vaccines – but there are only a limited number of these, so you’ll have to make each one count. To make matters worse for the survivors, each time one of them is infected, the Tyrant’s power grows – his tentacle gets longer, and he gains the ability to reach over pallets or window vaults.

On top of all that, the Tyrant also has AI-controlled zombies lurching around, waiting to take a bite out of any survivors they can get their teeth on. This will be the first time Dead by Daylight has ever had AI-controlled enemies, and Behaviour Interactive sounds extremely excited about them. Escaping from the Raccoon City Police Department sounds like it’s going to be quite the job.

The Resident Evil Chapter for Dead By Daylight will be available June 15 for $11.99 or your regional equivalent.