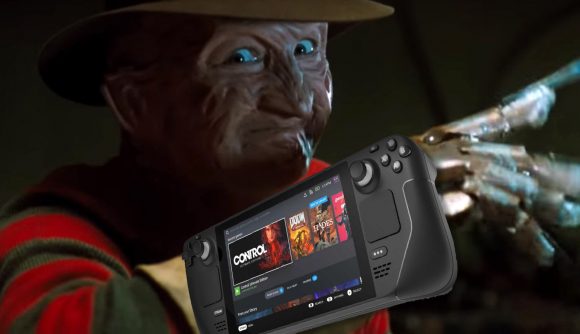 Valve’s Steam Deck handheld PC is out this December, if all goes well, although the developers of Dead By Daylight “can’t promise” the horror game will work on the system at launch – due to issues with the Easy Anti-Cheat system, apparently.

With the Steam Deck due out in just a couple of months to the pre-orderers who managed to snag a system, Valve is doing its best to assure users that most of Steam’s library – and indeed, the PC library in general – will be playable at launch.

However, there have been issues with some games and the anti-cheat software available. Fortnite’s BattlEye will support the system, as will Easy Anti-Cheat, but it’s up to developers whether or not they implement the changes and updates necessary to get this software working – along with the games that rely on them. Dead By Daylight developer Behavior Interactive has previously confirmed support for Steam Deck, but now it’s saying this issue might prevent the game from being playable at launch.

In a recent question-and-answer session on Twitch (transcribed here), the team was asked again about Steam Deck support. Product manager Justin Banks replied that “we do plan to support it… it requires updating of the anti-cheat system to a version that would support it” adding that, “we can’t promise that Dead By Daylight will actually run on it at Steam Deck launch.”

It’s certainly not hopeless, as community manager “DeathByGiggles” added “we shall see” to the discussion, it’s just not something Behavior can promise right now. They did think the Steam Deck was “really cool”, however.

Here’s everything we know about the Steam Deck right now, but if you pre-order now don’t expect to get it in December – Valve is currently estimating a “Q2 2022” release for the next batch of stock. While you’re waiting, here’s what it looks like naked. You’re welcome.