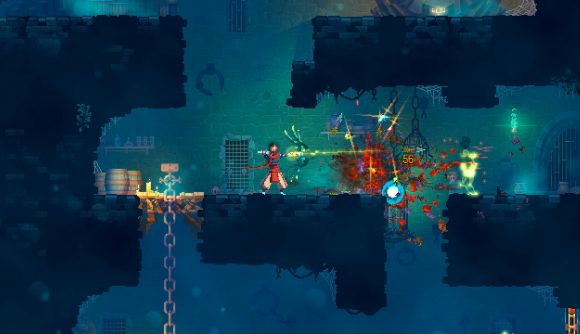 Dead Cells is about to officially celebrate its third birthday, and the roguelike platformer isn’t done growing yet. The latest alpha adds some new features meant to help ease the difficulty curve for new and lapsed players alike. Oh, and difficulty sticklers can remain calm: these are all entirely optional.

The first new feature is a training room, where you can “hone your skills against all the mobs and bosses you’ve seen,” with the exception of one certain spoilery boss. You can just hop straight in, do some zero-stakes practice fighting, and then head back into a proper run once you’ve warmed up.

Another new feature is called Aspects. These are “extremely strong powers” that will make runs much easier. They’ll allow you to get a feel for new biomes, for example, without having to fight every inch of the way through. The tradeoff here is that while using aspects, you won’t be able to earn the next boss cell if you wind up beating the game. However, you can use aspects to reach new areas and, Motion Twin hopes, discover more of the game – and possibly ragequit less often.

There are now quite a few potential paths through Dead Cells thanks to several updates and the Fatal Falls DLC. Now you can chart your way through using the new world map feature. Handy!

To access the alpha branch, find Dead Cells in your Steam library and right click. You’ll want to select ‘Properties,’ and then head to the tab marked ‘Betas.’ From there, use the first dropdown box to select ‘Alpha – Not for the faint hearted.’ Close the properties menu and wait for Dead Cells to update. Voila, you’re now in the alpha.

Motion Twin points out that the alpha is still in alpha, so you may find that it’s less stable than the main branch. If you’re okay with that, head in and check out the new features.