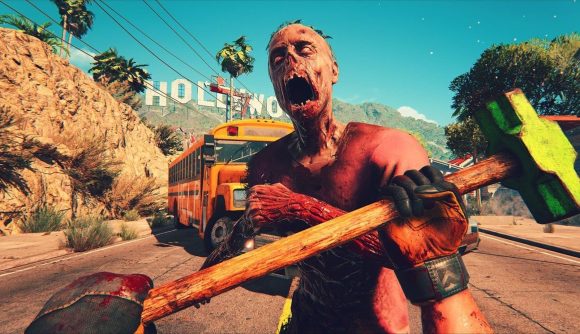 You can play a version of Dead Island 2. A five-year-old development build of the zombie action-adventure sequel is being shared around after appearing on a message-board, spawning numerous videos showcasing the contents.

The build, first discovered on the V board on 4chan, is dated 2015, from when Dead Island 2 was still under construction at Yager, the studio behind Spec-Ops: The Line. Eurogamer has confirmed what we see here was made by Yager.

What’s here is very much in early stages, but the bones of the experience are visible. You have the array of weapons, from crossbows to assault rifles to maces and beyond, a host of human characters and zombies, vehicles, and a few metropolitan areas to jump around and shoot in. There’s an option for online co-op, but it’s been deactivated. You can find a ‘Test Playground’, and a bunch of cheats can be activated, like God mode, infinite ammo, and being able to move the camera anywhere in the map. Placeholder assets sit over a lot of the content, so this was a real work-in-progress, emphasis on the in-progress.

Dead Island 2 has had a rocky development, to say the least. The game is now on its third studio. Yager showed a version to press back in 2014, but then there was a delay from April 2015 to 2016, and Yager and Deep Silver parted ways in July 2015. Sumo Digital were brought in as of March 2016, only for things to go silent until Deep Silver’s own Dambuster Studios were revealed to have taken over as of 2019. THQ Nordic reassured everyone that the thing is still in the pipeline, too.

While we wait for some more substantial news, why not check out our list of best zombie games to satiate your appetite for rotting flesh.