Sure, we’re all excited to get our hands on shiny new 30-series graphics cards from Nvidia, because we’re all keen to see what games will run in 8K – even if most of us don’t own monitors that support that crazy resolution yet. The key to getting most games up to that level, though, is Nvidia’s new DLSS ultra performance mode, which upscales lower-resolution images using adaptive deep learning AI. But there’s another way to use that tech, as one YouTuber has demonstrated.

Instead of boosting a 720p or 1080p image up to 1440p or 4K, YouTuber 2kliksphilip has used DLSS’ ultra performance mode on Death Stranding running at a tiny 427×240 resolution and upscaling it to 1280×720. The result? Well, Death Stranding looks a bit bad – the image is fairly fuzzy, there’s a lot of shimmering in distant objects, and you see halos around objects where the AI can’t quite figure out where to draw a firm edge.

However, using ultra performance mode on 1080p in Death Stranding increases the base resolution to 640×360. As 2kliksphilip points out, this is right around the resolution you’d find in Nintendo 64 games. 640×480 used to be a common CRT monitor resolution in the ’90s, so some readers may recall playing the original Doom and Wolfenstein games at this setting.

Upscaling that clunky, low-res version of Death Stranding to 1080p using DLSS’ new mode results in a surprisingly clear image, and the benefit is absolutely killer framerates. You can watch the full video here: 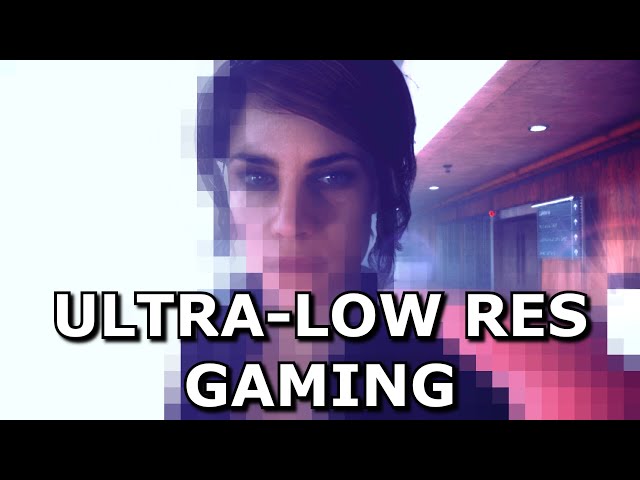 There are some minor limitations: DLSS can take a moment or two to gather enough information about a scene to fill in the gaps created by upscaling it by a factor of nine, and the resulting visuals can sometimes appear a bit smudged. But as the game is in motion, these can be pretty hard to notice – particularly if you’re getting beast-mode framerates. It’s not perfect, no, but it looks a hell of a lot better than it should.

As 2klikphilip points out, these applications are more for curiosity’s sake than anything else at this point, but it isn’t hard to imagine DLSS tech like this making its way into Switch games and VR games in the near future. It’s also handy as an anti-aliasing technique – you can have it render at your monitor’s resolution and then upscale to a higher resolution, which obviates the need for other, more expensive AA methods.

Death Stranding and Control are the games 2klikphilip uses as examples here, but there are certainly more open-world games on the way that will undoubtedly take advantage of this technology.