If you’ve been fiddling with graphics settings for any amount of time, you’ve probably come to accept a basic premise: the tradeoff between performance and visual fidelity. That’s not the case with Nvidia’s DLSS 2.0 tech as it’s been implemented in Death Stranding, though. The deep learning upscaling process actually makes the game look crisper while also providing a significant performance boost.

That’s what Nvidia is showing off in the video below. In it, you see side-by-side instances of Death Stranding, both running at maxed-out settings in 4K on an RTX 2060 graphics card. With DLSS turned off, the frame rate counter stays around 30 fps, while with DLSS turned on and set to quality mode, the counter reads 68 – more than doubling the frame rate.

That’s obviously a huge boost to performance, and it’s what we’ve been told to expect from DLSS since it launched – Nvidia said the tech could boost frame rates in Monster Hunter: World by up to 50%, and that was before the company rolled out the newer DLSS 2.0.

The trouble with the original iteration of DLSS was that you’d often wind up seeing some muddiness and errors creep into scenes as they were upscaled to a higher resolution. That seems to have been solved, as you can see in the video below. 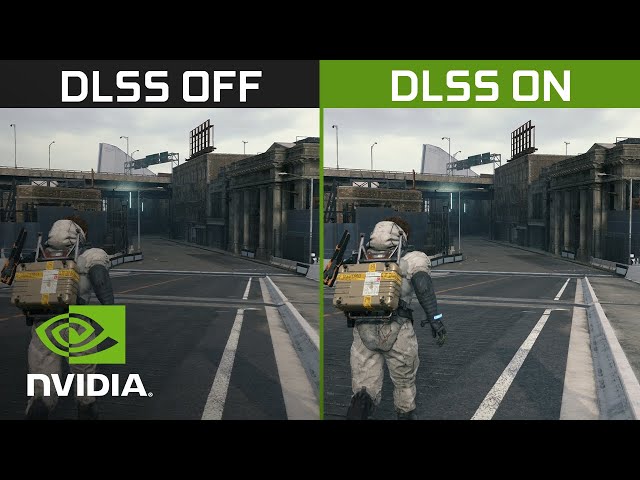 The text on the tape around Sam’s cargo containers is significantly bolder and crisper while using DLSS, and the same applies to other details in the scene: the holographic information text and the textures on the crosswalk all look quite a bit better using DLSS, with no visible upscaling artifacts.

That’s obviously a curated clip from the company that’s selling the technology, but anecdotally it holds up. I don’t have side-by-side screenshots to share for comparison, but running Death Stranding in 2K at max settings on my RTX 2070 Super with DLSS turned on, the game looks terrific and generally runs at more than 100 fps.

It’s exciting to see this tech making pixel-perfect upscaling – and beyond, really – a reality, and there’s the real chance that it makes high fidelity visuals obtainable on mid-tier systems at some point. Perhaps hardware won’t always have to be a limiting factor on graphics capabilities.