There are a few Death Stranding spoilers below, as we’ll be chatting about beating the boss and touching on what awaits you next, so please continue with caution.

Once you arrive at Edge Knot City’s delivery terminal in Episode 9, Higgs will give you his usual speech about the end of the world and show you Amelie, who he’s kidnapped to help conduct his own nefarious deeds. Part of this process of ending the world involves summoning some kind of gigantic BT creature with a head shaped like a clump of Chiral Crystals. This is the massive beast you may have seen in trailers leading up to Death Stranding’s launch. It is also responsible for holding Amelie, whose fate is now unknown.

How to beat the giant BT in Death Stranding

When the fight starts you’ll be trapped in a small area outside of the Edge Knot City terminal. This is the battle arena, and you’ll see the giant BT walking towards the arena from the road ahead. Note that on the giant BT you’ll see Amelie and Higgs embedded in different locations on its body.

To damage the giant BT you can certainly shoot it with Hematic rounds, but you’re only going to deal critical damage if you actually hit Higgs with your shots.

He’ll start out on the BT’s chest and then move to the shoulder, but regardless of where he is just make sure you’re angling every shot towards Higgs and not just the BT, because that’s just wasted ammo. At this point you should have access to rocket launchers, grenade launchers, and assault rifles, so give it everything you’ve got. With slow moving projectiles, try to angle them ahead of the BT if it’s moving to get some shots on target as the beast does love to rotate at jarring intervals. 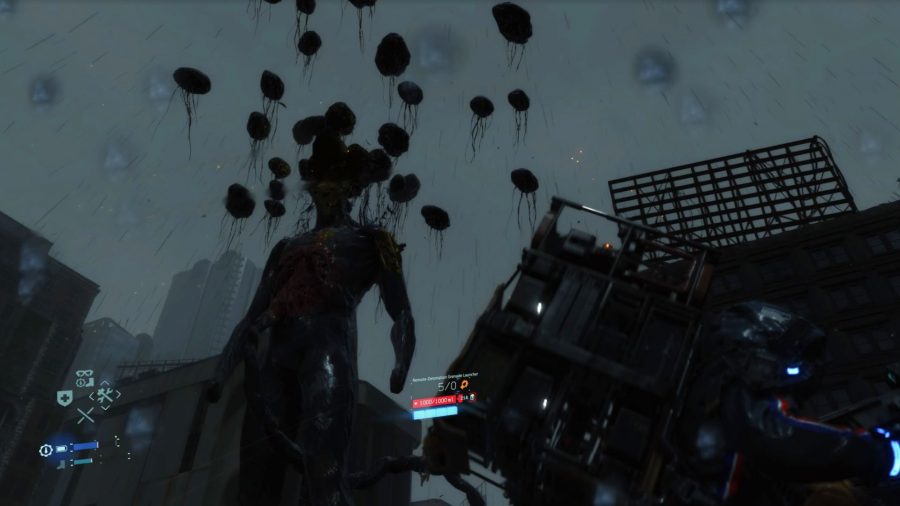 Watch out for the projectiles the giant BT sends at you. You can shoot them in midair if you trust your aim. If they land, make sure you’re on top of a building so the golden goo monsters can’t pull you down and repatriate you, ending the fight quickly.

If you die you’ll lose some progress but it’s not so devastating. Just be careful and make sure you’re in a steady position atop a structure at all times so that it isn’t easy for the BT to wallop you.

The best tip for this boss battle is to keep calling into the aether. With that you can summon white avatars of other players that will rise from the deep and throw helpful equipment at Sam. You can very quickly receive blood bags and grenade launchers to keep you alive when the going gets tough.

Make use of the items strewn around the battle arena, too. This may mean jumping into the tar and causing yourself some stress amidst the goo monsters, but as long as you’re quick with it and keep leaping towards a building, you should be fine.

Of course, beating this giant BT boss fight is just the start and you can expect to face off against Death Stranding’s Higgs soon enough. There’s also a giant whale BT to watch out for. For more help navigating this apocalypse game then check out our guide to getting Death Stranding vehicles and dealing with Vog.