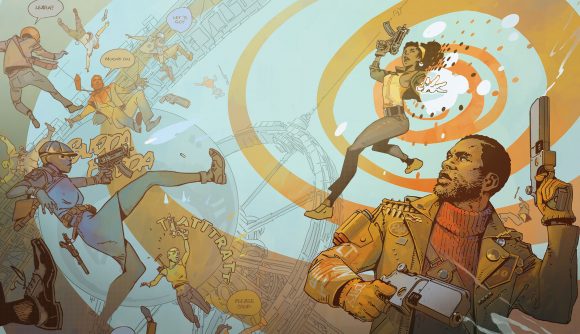 Last month, Arkane issued a Deathloop hotfix following launch day complaints linked to stuttering issues. While the patch addresses what the devs describe as “mouse-based camera movement” that could be perceived as a stutter, it also said it was actively working on a “separate, but related issue” that affects performance. Thanks to the game’s first major update, it looks like those issues are fully resolved, and the players will be able to now boost fps even further using Nvidia’s DLSS AI upscaling.

According to the 11GB PC download’s patch notes, the update features fixes linked to “dropped frames and hitches in camera movement” while implementing several improvements across the board, including crash fixes and tweaks to ray tracing performance. Thankfully, the patch cleans up a particularly disruptive menu bug that unintentionally resets Colt’s progression when selecting ‘no’. It obliterates several online play issues that could give Julianna players the edge, like the ability to hear Colt’s private radio conversations.

While Deathloop’s big overhaul covers a lot of ground when it comes to bugs and performance, but it also adds some pretty neat features and enhancements. While the shooter already had support for AMD’s FidelityFX Super Resolution, the addition of Nvidia’s DLSS means that RTX graphics card owners can increase frame rates while still enjoying higher resolutions and image quality. If you use a PlayStation DualSense controller to play PC games, you’ll be able to take advantage of the pad’s audio, meaning you’ll get to hear Julianna gloat down from that tiny speaker in your hands.

From what we can tell, Deathloop’s update seems to be going down a treat with gaming PC owners, with players reporting stable frame rates on the game’s Reddit forum. So, here’s hoping fans are now able to experience the first-person adventure at its full potential. After all, our review describes Deathloop as “a true tour de force” that’s bound to be one of the best games in 2021.