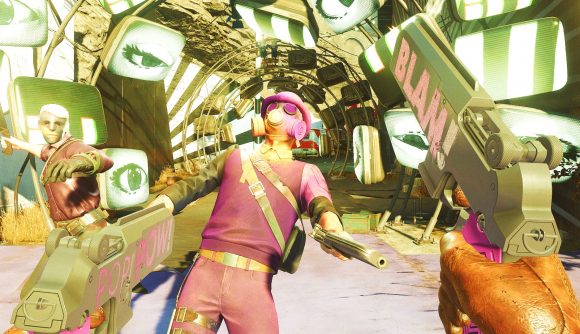 Arkane Studios’ new FPS game Deathloop has gotten a hotfix on PC that should address some of the stuttering issues players have complained about since launch. However, the devs say they’re still hunting down other leads that may be causing problems for some players.

Hotfix 1.708.4.0 rolled out today, and Arkane describes it thus: “This hotfix addresses an issue experienced by some players on PC whereby mouse-based camera movement could result in the appearance of ‘stutter.'” The wording here is important to note, because it indicates that this particular issue isn’t performance-related – it has to do with the way Deathloop handles mouse movement.

That, at least, should be addressed with this hotfix, but Arkane says there’s still work to be done. The studio is also looking into a “separate, but related issue” that may also lead to stuttering in Deathloop, particularly at very high framerates. “We will update further on this as soon as we have more information,” the devs say in the Steam patch notes.

These issues haven’t cropped up for everyone playing the game, and it seems that capping the framerate at 60 fps and enabling Vsync cured the problem for some players. If you’re just diving in now, check out our guide to the best Deathloop PC settings for optimal performance on your PC, and be sure to review our guide to Deathloop slabs to get a handle on all of Colt’s upgradeable abilities.