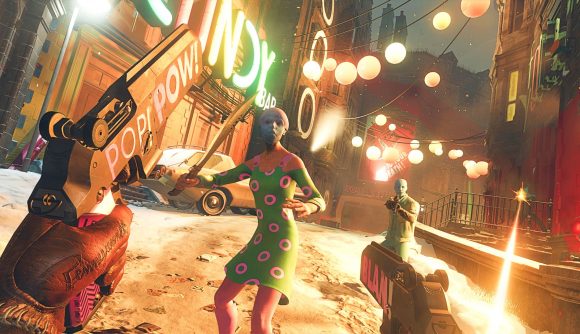 Deathloop is about being one of the only people on an island who knows what day it is, but that doesn’t mean you want your enemies to be completely clueless. Indeed, the Eternalists on Black Reef aren’t the brightest crayons in the box sometimes, and the FPS game’s latest patch should perk them up a bit.

The patch notes for Deathloop Game Update 2 start off with a section devoted to NPC behaviour, and list the ways in which the increasingly drunken Eternalists are getting smarter. They’ll notice now when bullets whizz by but don’t hit them, and when someone nearby gets assassinated. They’ll be able to hear nearby footfalls better and will react to them faster.

Enemies will no longer try to move to cover if you’ve gotten too close to them, and they’re able to work out where a grenade has been thrown from. They also won’t stop trying to kill Colt if Julianna links them to him using the Nexus slab ability. Developer Arkane Lyon says the patch also includes “numerous other small fixes and improvements to NPC behavior, reactions, pathing, and placement”.

Dim-witted Eternalists aren’t the only part of Deathloop that’s gotten attention in Game Update 2, however. The team has also done a nice UI pass, making several buttons and information screens clearer and easier to use – for instance, if you’ve remapped buttons, those will now correctly show up as needed in on-screen prompts.

Another nice change: if you’re playing either side of an invasion, you’ll log a ‘win’ if the other player drops out early, and AFK players will get tagged so you can see where they are and get things over with.

The full patch notes have the rundown on all the changes made in Update 2, and check out our Deathloop review if you want to know more about the game.