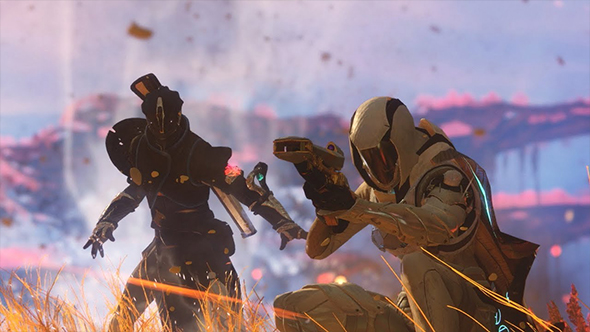 Update, March 26: Bungie have detailed the bold philosophy for their next Destiny 2 update in a new video.

Destiny 2’s “go fast” update is set to go live tomorrow, bringing with it a host of changes intended to make Crucible move much faster and more exciting. As Bungie said when they first detailed the changes coming 1.1.4, it’s less about time to kill and more about generating more excitement. A new developer video details some of the philosophy going into those changes.

Playing Destiny 2 is better with friends, and here’s our list of the best co-op games on PC.

Sandbox design lead Josh Hamrick says they started by looking at the weapons that are “kinda hot. They’re probably too hot for D2. In D1, people would’ve said – probably correctly – that means we would nerf those things. They’re nails that are sticking up out of the board, and we would’ve hammered them back in to be even with the board.

“For this update, we did the opposite. We said ‘These things are hot. Let’s bring everything else up to them.’ We started raising each thing up, whether it be in PvE or PvP. We’ve also learned the lesson of ‘don’t sand the coolness down.’ Leave the jagged spikes of personality in there.”

Character movement is getting way faster to help boost the flow of PvP, and some clips of the Dawnblade Warlock (at 2:01) show that speed in an especially impressive way. On Reddit, Bungie’s Cozmo says “Don’t expect everyone to fly around like a fighter jet, but yes the three melee subclasses are all running at the same speed now. Arc Strider’s attacks and dodges are much faster now.”

Regardless, Hamrick says “we’re gonna see some crazy shit” when the update goes live. He adds that they’re taking risks, saying “it’s not like we haven’t introduced obnoxious bugs into the game before.” He asks “what’s the worst that could happen?” as a clip of the infamous Prometheus Lens plays in the background. Whatever the specifics, the times ahead for Destiny 2 should be exciting.

Original story, March 10:Bungie provided more details on the upcoming 1.1.4 sandbox update to Destiny 2, discussing how they’re buffing weapons, abilities, and respawn times to make the PvP side of the game a lot faster.

Senior crucible designer Kevin Yanes wrote that players have said the PvP tends to feel too slow and complained about the “team-shotting” phenomenon of teammates staying in a group and picking off roaming players.

Yanes says time to kill isn’t the major problem – Bungie’s feedback, he says, indicates players don’t feel like they’re getting enough exciting moments out of the Crucible. To help fix this, in 1.1.4 they’re reducing the timers for respawns and power ammo. And if you die while carrying power ammo, you’ll drop a brick of it for anyone to pick up.

To help manage team-shotting, Bungie are taking the tracker out of Competitive and Trials. They’re hoping this will encourage players to communicate more and play less conservatively, trying for more solo flank attacks and not staying grouped up as much.

In PvE, most weapon types are getting buffs to damage and maximum ammo. Exceptions are grenade launchers, which are just getting an increased blast radius, and assault rifles, whose ranges and aim assist stats are getting nerfs. As might be expected, this means several weapon perks are getting adjusted, such as explosive rounds – the damage for this perk is getting reduced to compensate for the concurrent increase in base weapon damage.

Dawnblades are getting some significant buffs, and will be able to throw one additional sword. They won’t suffer any in-air accuracy penalty while using swift strike, their Icarus dash will cool down faster, and everlasting fire will grant an even longer super duration.