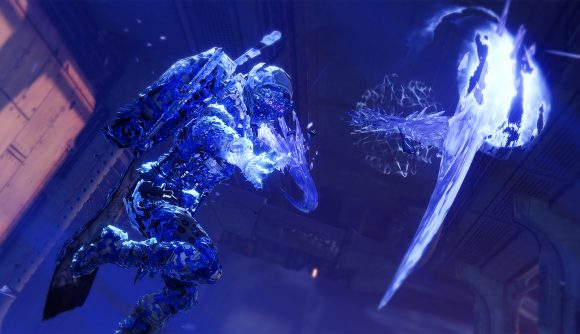 Since the launch of Beyond Light, Destiny 2 players have had access to a brand new subclass for each Guardian class – one built around the new Stasis element that freezes and shatters ice crystals summoned from darkness. Hunters have found themselves particularly well equipped in the Crucible, using the new Stasis subclass ability Shatterdive, which provides damage protection and – with the right fragment equipped – a huge boost to damage output. That ability is getting a pretty major nerf in the next update, so Hunter mains need to have their fun while they can.

In the latest This Week at Bungie, Bungie combat area lead Tomonori Kinoshita lists the changes coming to Shatterdive in the next update in order to “keep subclass decision-making interesting” – that’s a diplomatic way of saying that the way things are now, there’s really only one viable choice for Hunters, and that’s Revenant with the Shatterdive aspect equipped. That’s usually bolstered by a Whisper of Fissures fragment for added damage and burst radius – the better to erase everything in the general vicinity when the Hunter comes hurtling down into the floor.

Bungie will be reining Shatterdive in substantially with the next update, and here’s what’s in store.

First, Shatterdive is getting damage falloff against unfrozen targets, so its usefulness will be more limited to targets that actually get caught in the initial freeze. The max range is getting slashed from 50 down to 5, so it’ll be further focused into a much smaller area.

Damage reduction is getting halved, from 50% down to 25%, which is another nerf that several prominent Destiny 2 streamers have been asking for over the past month.

The Whisper of Fissures fragment is getting range and damage reductions as well, as follows:

Once Bungie has a chance to see how those changes fare in the multiplayer game, the studio’s PvP team will take a look at how the Stasis Titan’s Behemoth Super stands in the overall Crucible hierarchy.

The latest TWAB also goes over some changes to reward drop rates and the way you’ll be earning vendor reputation once Season 13 kicks off in a month or so.