I don’t know what I expect to happen when I try to combine Wirt’s Leg and a Tome of Town Portal in the Horadric Cube, but I could vaguely remember this spawning a portal to Diablo 2’s not-so-secret cow level in the original. I was hoping for bipedal bovines swinging halberds in glorious high-def, but it turns out I need to defeat the final boss to make it to Moo Moo Farm. To say that not being able to see the cows was my only real disappointment with the alpha is a testament to how well this remaster is shaping up.

Only three classes are available in the technical alpha: Barbarian, Amazon, and Sorceress. Young Dave exclusively played Necromancer, so it takes a little while to get used to each class. Sorceress is probably the closest of the three to Necromancer as she can fling spells at enemies, so I stick with her throughout the first couple of chapters on offer.

I grew up playing the base version of Diablo 2 and never touched the Lord of Destruction expansion, so seeing my inventory fill up with charms and jewels is a little confusing at first. Quality of life changes compound the initial confusion, but make getting back into the groove of things much easier. The modern, widescreen display means there’s a ton of space to integrate menus and make the game feel more friendly.

The biggest improvement is the map, which is now smaller and plonked in the upper right-hand corner of the screen. With the benefit of newfangled
widescreens, the minimap can stay on-screen indefinitely. It’s customisable too, with options in the settings menu to tweak the position and opacity, plus a fullscreen toggle. 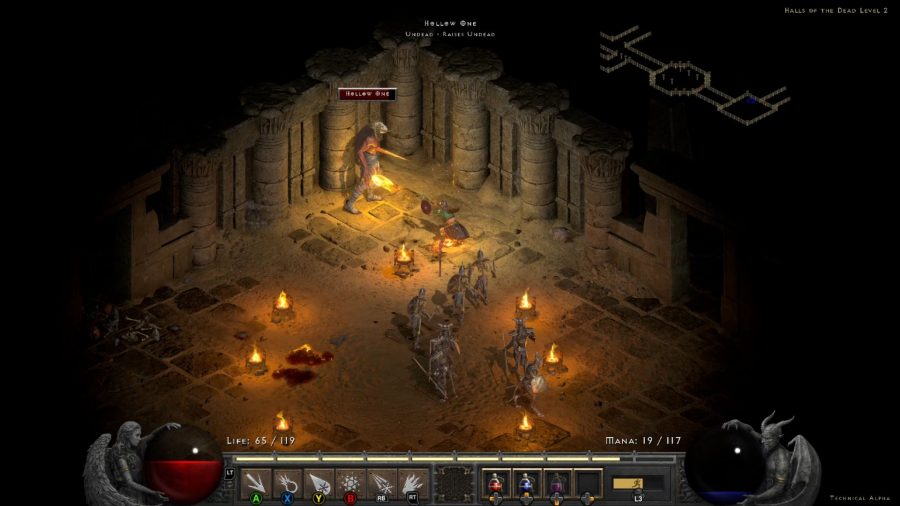 The item stash has also been upgraded. There’s only one private stash tab in the alpha, but I also have a second tab that’s shared across all my characters. The original stash in Diablo 2 was 24 slots big and that was it. No second tab. In Lord of Destruction, it was upgraded to 48 slots. In Resurrected, it’s 100 slots and there’s a second shared inventory tab.

The new stash appears to be inspired by a popular Diablo 2 mod called Plugy. It’s not quite the same, since Plugy gives players the option to store everything they’ve ever picked up, while Resurrected just has the two, 100-slot inventory tabs. This update doesn’t completely eliminate the constant inventory Tetris of classic Diablo, but it allows you to easily swap class-specific gear, and all those extra slots should make choosing what gear to ditch less fraught for newcomers. Overall, it’s far more convenient than in classic Diablo 2 where you would have to convince a mate to become your item mule. And the good news is that as the game is launching with mod support, there should be plenty of other handy Diablo 2 Resurrected mods.

Looking further ahead? Everything we know about Diablo 4

Of course Resurrected also looks and sounds stunning compared to the original. Over the years my brain has filled in the blanks when remembering what Diablo 2 looks like, so when I first boot up Resurrected and roam around the rogue camp I’m not all that impressed. However, when I press the G key the high-definition textures, improved lighting, and animations are replaced with the classic look – wait, this is what Diablo 2 really looked like at launch? Some liberties have been taken with the monster designs, but it’s generally for the better with the Gargantuan Beast’s face looking considerably less like a cat’s shaved arse in Resurrected. This is much better. 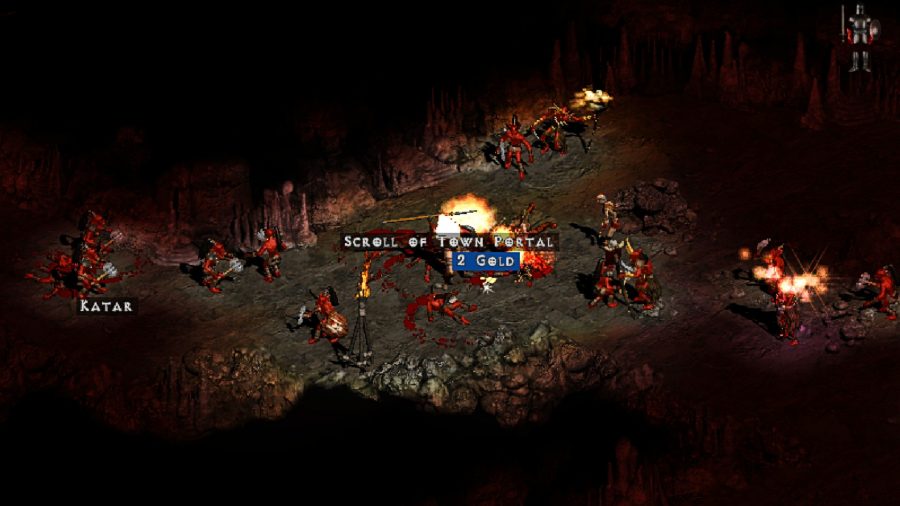 Speaking of which, there is now added gamepad support and I can switch from mouse and keyboard to gamepad at any time. Naturally, landing spells on a specific target from far away is much easier on mouse and keyboard, but it’s a welcome addition if you prefer the comfort of playing with a gamepad.

To say I’m impressed with Diablo 2 Resurrected so far is an understatement. The graphical improvements are superb, but it’s Resurrected’s smart gameplay and UI revisions that make the biggest difference, bringing just enough modern convenience to a 20-year-old game. I can’t wait to see Moo Moo Farm and its legion of armed cows in glorious HD.