Diablo IV is one of the most poorly-kept secrets in the videogame industry – it’s one of Blizzard’s biggest franchises, and the developer has all but confirmed that a new non-mobile game is on the way –  and that trend continues today, as a new magazine ad for a Diablo book seems to have leaked a pending announcement of the sequel.

The latest issue of German magazine GameStar (spotted by VideoGamesChronicle) contains an advertisement for the upcoming book The Art of Diablo, by Jake Gerli and Robert Brooks. It’s an official book published by Blizzard itself, and will be available around November 21.

The ad for the book says that it features “over 500 artworks” from Diablo, Diablo II, Diablo III… and Diablo IV. This is no typo – it’s a real magazine ad about an official Blizzard product – nor is it a mistranslation, as despite being in German it clearly lists “Diablo IV” amongst the games being covered in the upcoming art book.

You can see the ad below (snapped by Spiel Times). Assuming that Diablo IV is real, it is entirely possible this ad went out too early – and the game may be announced at Blizzcon between November 1-3, which is prior to the book’s release later in November. After the disaster that was Blizzcon last year, Blizzard knows it needs to have a better announcement than a Diablo mobile game to cap its presentation. 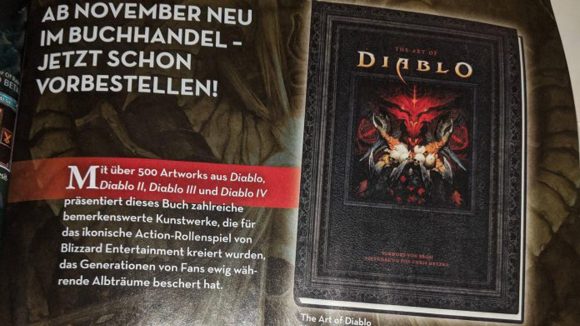 As mentioned, Diablo IV has been a very poorly kept secret. Reportedly it has already been shown to Blizzard employees, job postings point to its existence, and investigations state that it started out as a third-person Dark Souls-like game. It would be good to finally get closure.

This leak comes after a very bad week for Blizzard. After it banned a Hearthstone player for supporting protesters in Hong Kong the publisher has been mired in controversy – with its own employees staging a walkout and a major Overwatch Switch launch event being cancelled. Even if Diablo 4 or a release date isn’t revealed, Blizzcon next month certainly will be interesting.