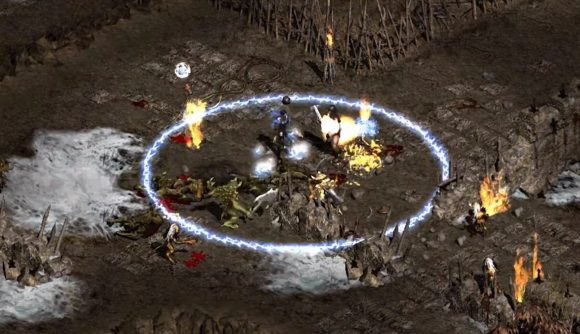 A second season of content has launched for Project Diablo 2, a fanmade remake of the classic RPG game. Project Diablo 2: Season 2 Transcendence brings a long list of tweaks, from general gameplay, to specific class traits, and more.

From the patch notes, a couple of more wide-ranging tweaks are in PvP. Damage to players has been reduced by 50%, and Psychic Hammer and Mindblast both do 25% damage in PvP, and the devs note more modifiers are coming to balance players taking on each other. Some enemies have been altered, like the big man himself, Diablo, whose health has been increased for Hell difficulty. Diablo clones have been given new moves, a rare drop of one of five unique items, and the encounter’s now “slightly different.”

Nine new maps and one new dungeon have been added, and walls in maps now go transparent. Maps within maps have a higher drop rate, and bricking maps now has a 10% chance for a downgrade, 10% for same tier, and 10% chance to go to a higher tier. Maps have been removed from external boss tables, and some sound lag has been fixed.

The team put out a trailer to showcase some of what’s in the update:

The patch notes linked above has all the more granular changes, listing all the alterations to items and classes. We recently spoke to the devs behind Project Diablo 2 about what makes the original so special. Blizzard’s own remaster, Diablo 2: Resurrected, was revealed last month.