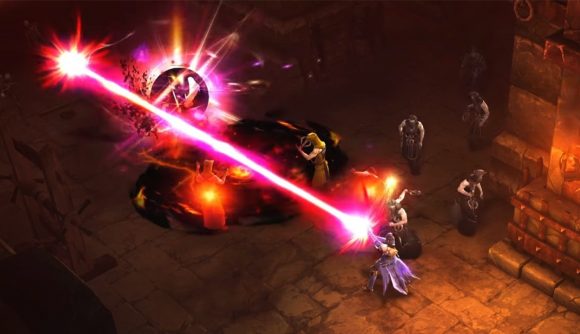 The annual Darkening of Tristram event is set to kick off in Diablo III again, giving players the chance to revisit the town of Tristram more or less how it was in the original Diablo, which came out way back in 1996. While Blizzard hasn’t explicitly said whether the event will take on any new twists or turns this year, there is new loot to collect by completing achievements and just plain old poking around.

The Darkening of Tristram was first held at the end of 2016, as a celebration of Diablo’s 20th anniversary. It added a grainy, pixelated filter to recreate the visuals of the original RPG game, and sent players down through a memory lane of landmark locations from OG Diablo. You’ll fight the original version of The Butcher, for instance, who comes out growling “FRESH MEAT,” and find a few special weapons and other pieces of gear.

This year, you’ll begin your journey back to retro Tristram by investigating a group of cultists who are causing a bit of bother in Sanctuary. You’ll have to hunt them down to find clues that point you to a mysterious portal, which in turn will send you back to Ye Olden Dayes of Tristram.

Once through the portal, you’ll find yourself in front of the cathedral that marked the entrance to the dungeon in the original Diablo. You’ll have to descend through its depths in order to ultimately face the Lord of Darkness – who we lovingly know as Clifford the Big Red Spiny Demon (it’s Diablo, in case we haven’t been clear enough).

Your rewards for participating include new transmogs, new achievements, portraits, “iconic items,” and even an adorable little pet Butcher. Careful not to over-feed the little fella, he gets cranky.