The pre-BlizzCon leaks continue for Blizzard this morning after the same accidental gear store reveal that gave us Sombra concept art also revealed something Diablo-shaped. This one is a little more mysterious as exactly what it’s for remains up in the air. In the art, which you can see a larger version of below, the extra-popular Necromancer class is shown as both a man and a woman. Theory is that whatever plans Blizzard have for Diablo’s 20th anniversary year they involve the undead-summoning one as a new class.

Read more: the best RPGs on PC these days.

Here it is, with a bigger version over on imgur: 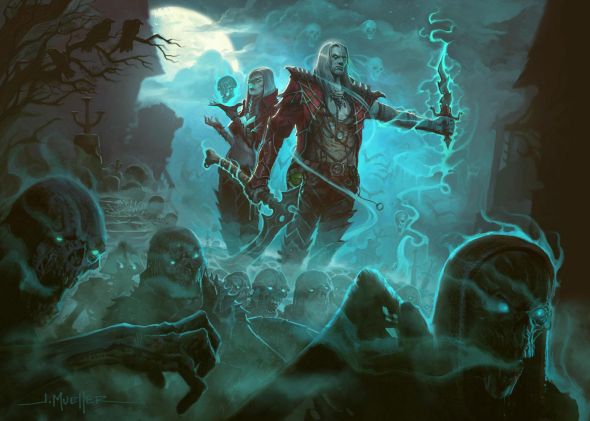 The artist is John Mueller, who has been at Blizzard since the start of this year, officially listed as an art director on LinkedIn though with no attached project.

First: the possibilities. While Heroes of the Storm got the Necromancer Xul in the fairly recent past, the female version of the same character is only really necessary if the plan is to add the character as playable in Diablo 3. The evidence is also rather starting to stack up, between the Diablo anniversary party, a new brand of t-shirt being made available and this, it would be a hell of a set of teases for Blizzard to lay on their community without doing anything. While a full expansion or Diablo 4 would probably have had more impact on the BlizzCon schedule, a major patch for the anniversary that adds a character wouldn’t be out of the question.

That said, concept art is just concept art. Unlike with Sombra, who we know has been coming for far too long, the Necromancer is an established character within the universe already, who was in the game as a quest-giving NPC. He also already features in another title, so it’s not out of the realm of believability art was created for that and released now as a nice new poster. With the rumours of HD remakes of Blizzard’s older titles also still swirling, it could be for those.

All, doubtlessly, revealed during the opening ceremony this Friday. More debate as to legitimacy over on Reddit.