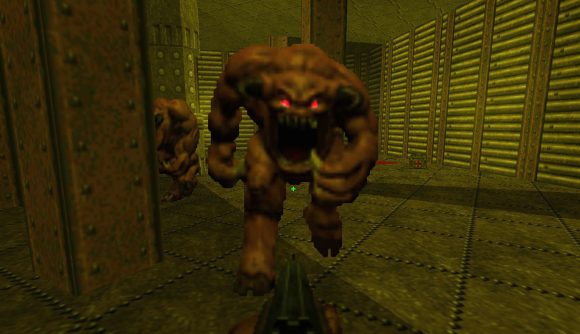 October 8, 2019 The official Doom Twitter feed has announced that Doom 64 will come to PC.

The 24th annual QuakeCon event brought with it a lot of news about id Software’s upcoming Doom Eternal – including the introduction to a new demon called the Doom Hunter, and a lot of details about the game’s multiplayer component Battle Mode. And while the Doom Eternal release date has now been pushed back to March, 2020, there’s good news for fans keen to try out Doom 64 – Id Software has confirmed that it’s heading to PC.

In the long-running Doom series there’s one that’s never legally been available on PC, and that’s Doom 64. While Bethesda previously revealed on a Nintendo Direct that the game would be re-released on Switch, developer Id Software has now announced on the Doom Twitter channel that Doom 64 will be a pre-order bonus for Doom Eternal – so, you’ll be able to play it for free if you pre-order the game. It’ll be available to play alongside Doom Eternal on March 20, 2020.

This follows a previous hint on the Doom Twitter channel that it might not be a release exclusive to the Nintendo Switch. In a reply to someone asking if Doom 64 will be released on platforms other than the Switch, the Doom account simply replied “that’d be neat”.

In July there was also a review by PEGI – the European age ratings board – suggesting that Doom 64 was on its way to PC and PS4, and probably on Xbox One and Nintendo Switch too. In addition, a second rating for the game appeared on the Australian Classification Board (via Bloody Disgusting), marking the publisher as Bethesda and the applicant as Zenimax.

An update on DOOM Eternal: pic.twitter.com/2LWrfh6e4Z

While Doom 64 released on Nintendo 64 in 1997, and has never been re-released anywhere else since – until next March, it seems. This was probably down to licensing issues, as the game wasn’t developed by Id Software – it was made and published by Midway. It’s actually a completely original game with its own reimagined look, rather than just a port, and even features new demons.

While the Doom timeline doesn’t matter too much to the games, Doom 2016 seems to be set following the events of Doom 64 – so it’s always been unusual that Doom 64 has been completely unavailable to buy since the N64 era. PC players have ways of getting around that problem, but a proper official re-release of Doom 64 around the release of Doom Eternal will surely be a welcome development for Doom fans.