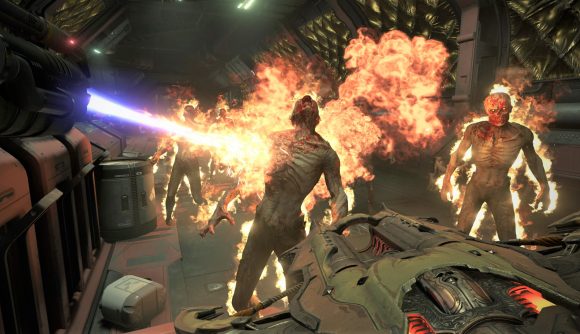 Bethesda has announced that players who pre-order the Doom Eternal Standard Edition will receive a Doot Revenant skin based on the popular trumpet flaunting internet meme, ‘Doot Doot.’ The standard edition is $49.94 and available to buy through Amazon.

The Doot Doot meme, also known as Skull Trumpet, is a 3D animated sprite of a skull playing the trumpet. The Doom devs have a long, loving relationship with the meme, hiding it as an easter egg in Doom artwork, placing the trumpet noise in their official soundtrack, and now doot doot has been materialised as a skin for players to own.

The Revenants make a return in Doom Eternal and are, normally, a gross mess of flesh and bone. However, the Doot Revenant is flaunting some shiny accessories and has golden chest armour and two massive trumpets above its head where the weapons would normally be.

Along with the Doot skin, players who pre-order the standard edition will also receive a shotgun weapon skin and a master level bonus campaign.

These announcements have followed on from the news of Doom Eternal’s release date in November and its new asymmetric multiplayer mode. If you wanted to know more about Bethesda’s gore fest than check out our Doom Eternal gameplay preview.