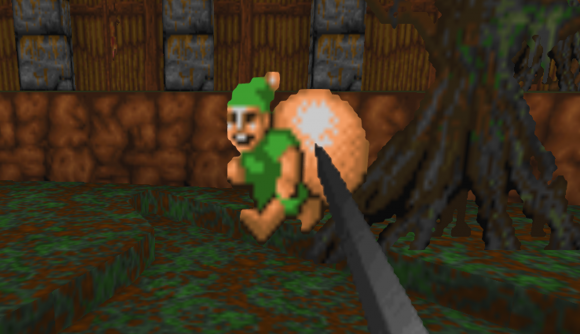 A talented Doom modder has created a first-person version of SEGA’s classic MegaDrive/Genesis hack-and-slash game Golden Axe, and it’s available to play now. The Golden Axe Doom mod is only at the pre-alpha stage, but it captures the feel of the original game perfectly.

The game is being created by self-proclaimed Doom modder and retro FPS enthusiast @BBblazkowicz on Twitter, who is creating Golden Axe Doom using the latest version of GZDoom. A pre-alpha build of the mod is available now, which allows players to try out the first level of the game, ‘Village Outskirts’.

Since Golden Axe doesn’t have any guns or long-range magic like in Amid Evil, combat is entirely melee-focused – and the mod adds a number of controls to make it fun to play, including the likes of jump-attacks, alternate-fire kicks, and even spinning attacks. Other than that it’s a pretty authentic Golden Axe experience for fans of the original game, except in first-person – which actually makes the game a lot tougher.

The mod comes with music, sound effects, and sprites in the style of the first Golden Axe, and even the game’s super-powered magic abilities are implemented – so max your magic potions and click a button to spawn a dragon that annihilates anything on-screen. Health is collecting by attacking those annoying gnome thieves with their flesh-coloured sacks. Sadly, while those cool lizard mounts are there they can’t be used yet – although BBblazkowicz continues to add features to the game.

every level will have 3 villagers in danger u have to kill their attacker before their all killed, rescue all 3 and get a health bar back!#doom pic.twitter.com/09r0PvozRz

Fans continue to make fantastic creations based on Doom, over 25 years since its release. The closest recent comparison to Golden Axe Doom is the fan-made recreation of Castlevania or this version of Skyrim. Other excellent mashups include Fall Guys, Spaceballs, and, er, Doom (2016) in Doom (1993). Truly it’s the gift that keeps on giving.