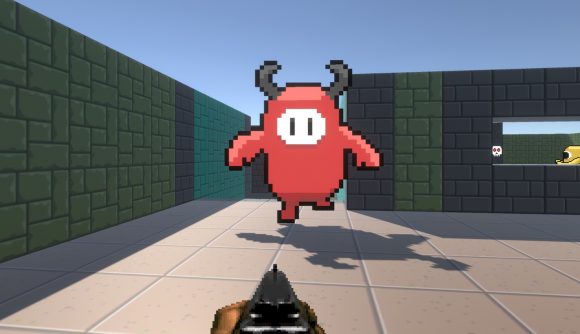 Since Mediatonic’s bumble royale came tumbling onto our monitors earlier this year, fans have got creative with unofficial collaborations. The multiplayer game’s beany boys have come to Skyrim as followers, and have also popped up in Raccoon City as, eh, something in a Resident Evil 3 mod. Someone has even created a Fall Guys world in Minecraft to recreate the game’s obstacle courses. Now, though, a busy developer has kicked things up a gear with a free PC game called Doom Guys.

As you can probably guess, it’s a mashup of Doom and Fall Guys. As spotted by Free Game Planet (thanks, The Gamer), this one is a parody of the two games that sees the Doom Slayer kidnapped by a bunch of Fall Guys and imprisoned in their temple. You play as the Doom Slayer here, and have to blast your way out to freedom.

The game is available on Itch.io, and features three different environments, four weapons, three different enemy types, and “an episode of the Fall Guys TV Show”. Downloading Doom Guys is pretty straightforward, but you can head over to the website if you’d like some more instructions.

Fall Guys has enjoyed a fine run of form since releasing earlier this year, selling over seven million copies on Steam in just three weeks. Mediatonic isn’t letting up either, as Fall Guys Season 2 should be touching down next month with a host of medieval-themed skins and levels.

As with any popular game, though, the developer is tackling cheaters as we’ve seen plenty of clips of Fall Guys hackers on social media. It looks like it’ll be sorted reasonably soon, though, as there’s another update this week, and further down the road Fall Guys is getting Fortnite’s anti-cheat.