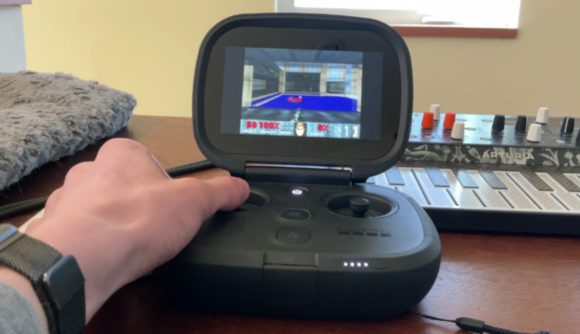 Another day, another strange Doom port. This time, it’s Doom on the controller for a GoPro Karma drone. The buttons make doing much of anything difficulty, but as ever, the FPS game perseveres.

This was posted by Maserati52 on Reddit. As it turns out, getting Doom running on the hardware isn’t difficult. GoPro’s controllers use Android software, and all you need to do is install a new version of Android, and the Android port of doom should boot up without any issue. Moving around and shooting is a different story. The controls are strangely mapped beyond the left joystick, none of the other buttons activate weapons, and Maserati52 doesn’t believe remapping is a possibility.

Later in the thread, they point out that doing this absolutely did some damage to the controller. Funnily enough, GoPro isn’t keen on you tinkering with the operating system willy-nilly, and then using it to play old games for internet points. Maserati52 had to factory reset a few times to get things back to normal. We’re not saying enhanced Doom functionality would shift more drones, but at the very least, the PCGN team would probably be more interested if that became a thing.

You can check out a brief demo below:

This isn’t the first time Doom’s invaded video capture technology. It was ported to a digital camera a little while ago. For a more abstract Doom port, here’s Doom on the software behind restaurant display systems, and for the retro enthusiasts, here’s Doom on a SEGA Genesis.