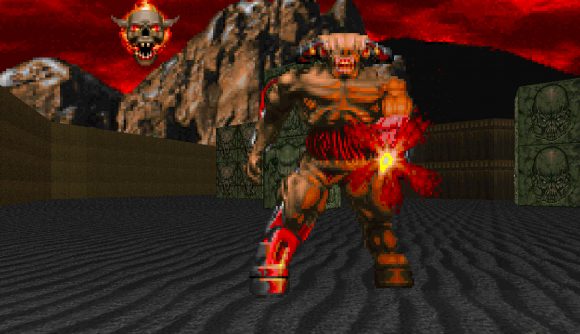 The original Doom is so synonymous with the nineties, it’s hard to imagine the FPS game happening at any other time. A pair of developers have now made a version of the horror game that looks and feels like it came from the previous decade.

POOM is Doom, by way of the eighties. Made by the duo of Paranoid Cactus and Frederic Souchu, it’s a remake of the old game using PICO-8, a virtual console that emulates hardware limitations of the late eighties. This means a 128×128 display, 32k “cartridges”, four channels and eight waveforms for sound, and two six button controllers, mapped to a PC keyboard.

The id Software stalwart doesn’t look or sound all that much different here, the lower fidelity makes everything a little fuzzier, but the synth-y riffing is on point. Where you notice this isn’t quite the same is in the limited buttons. In the standard controls, a four-directional D-pad means left and right are for turning, and no choosing to run or walk. The two other buttons are split between firing your weapon and pressing a button. Combined with the liberal use of corridors, presumably because open spaces quickly become tough to render at this scale, and it’s a touch claustrophobic compared to the Doom Guy adventures of 1993 and beyond.

You can play POOM in-browser on Itch.io through the link above. It supports keyboard and mouse, if you find just keyboard too finicky, and a couple of other control schemes. If you’re on the lookout for some strange, interesting little projects, searching the PICO-8 tag on Itch is very worthwhile. You can find more info on trying PICO-8 out for yourself here. 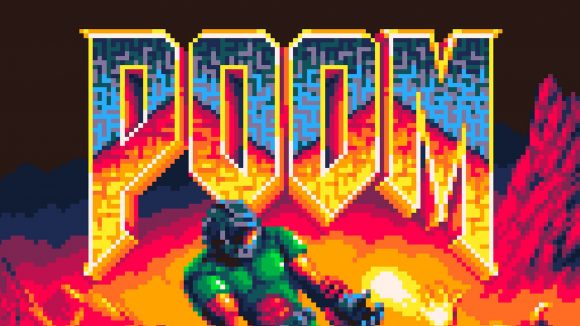 Doom was finally ported to the SEGA Mega Drive last week, where it limped along in greyscale. Nintendo Game and Watch, sheep in Minecraft, a custom PC in Minecraft, and a McDonald’s cash register are a few other methods of engaging in some rip and tear. Doom Eternal, the beefy 2020 iteration, arrived on Game Pass this month.