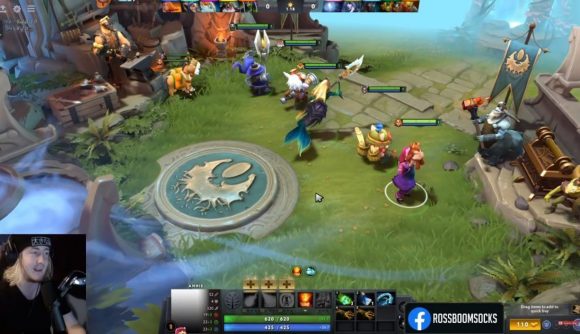 Simply titled ‘Dota 2 but League Heroes’, the mod was made by i dont feel playing, and takes the roster of League of Legends champions, and inserts them into Valve’s multiplayer game. The characters are matched like with like, as close as feasible, so you get Meepo as Teemo, and Annie as Lina, and so on. LoL content creator Buba ‘RossBoomSocks’ Corelli examined the modification on-stream, and gave it his seal of approval.

Using a team of Teemo, Nami, Tristana, Annie, and Veigar, he comments they actually look better in Dota 2, despite some slight glitches – Annie is a bit too short for her corresponding model. Predominantly a League player, Corelli talks about some of the wider differences between the two games, like Dota 2’s custom games, that might make a mod like this interesting to keep up with. “Just thinking in my head, all the fun stuff you could do if League had a custom games thing, and a custom lobby,” he says, adding: “There’s items in Dota 2 that you’d never see in a million years on League of Legends, I’m looking forward to trying them out.”

The length of a typical Dota 2 game does weigh on him a little by the end, suggesting that player stamina might be a flaw in the crossover. “It was very, very fun in the beginning,” he says. “But oh boy that was a long game, and that’s all I’m saying.”

You can see his full exploits with the mod below:

You can download the mod here. A new wave of Dota 2 battle pass content rolled out this week, giving Pudge a Toy Butcher skin.