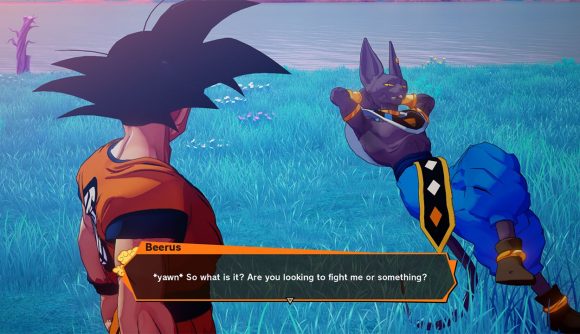 Dragon Ball Z: Kakarot’s first DLC has been (partially) unveiled – it’s called A New Power Awakes – Part 1, and it sets you on a quest to take on Beerus, Universe 7’s God of Destruction. He also happens to be a cat.

Bandai Namco says the DLC brings characters and transformations from Dragon Ball Super, and that once you have it, you’ll be able to access the new content from any point in the main game’s storyline. You’ll need to train with Beerus’ own martial arts teacher, Whis, in order to learn the Super Saiyan God transformation and take down Beerus himself in the DLC’s exclusive new boss battle episode.

A New Power Awakens – Part 1 launches this spring, and it’ll be available as part of the Dragon Ball Z: Kakarot season pass. You’ll also be able to purchase it along with Part 2, when that piece of DLC launches later this year, Bandai Namco says. The company didn’t disclose any additional details about Part 2, so we’ll have to wait to find out whether Beerus knuckles under or keeps up with his villain act for another outing.