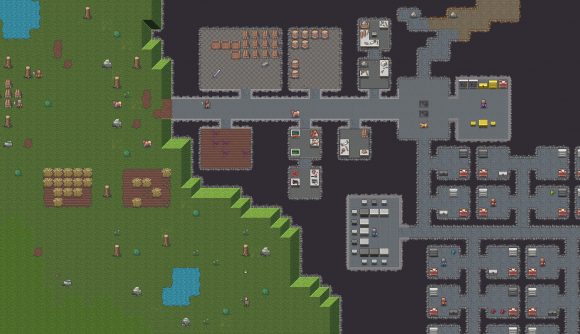 The Steam launch of Dwarf Fortress is still off in the indeterminate future – “time is subjective,” as its release date still reads. But creators Tarn and Zach Adams are busy working new and suitably complex systems into their colony management sim, and one of those is handling the question of how to create sprites for monsters that Dwarf Fortress has, up until now, only represented in text descriptions.

Most of Dwarf Fortress’ hundreds of fauna are ‘normal’ animals like guinea hens, mammoths, and sheep, and they’re fairly predictable-looking – even one goblin looks more or less like another goblin, at least as far as pixel art is concerned. Where Dwarf Fortress runs into potential problems, however, is with the monsters the game generates itself. Those include forgotten beasts, night trolls, and werecreatures, each of which is built by Dwarf Fortress using strings of descriptors.

As Tarn illustrates in a recent post to the game’s Steam page, Dwarf Fortress might come up with a night troll that has no skin, four long horns, and joints that all bend backwards. But it might just as easily create one that is covered in curly gray hair and has two narrow tails.

The possibilities are nearly endless, or at least so numerous that creating artwork for each possible combination would be a Sisyphean task. So instead, Adams is working on a very Dwarf Fortress solution to the problem, and that’s to build a system that handles it.

Tarn’s latest update also includes a peek at some other art in development for the Steam release, including differentiated sexes for domesticated animals, handy signs for stockpiles (if you haven’t played Dwarf Fortress, just know that stockpile organisation is extremely important), and an animated windmill with axles and gearboxes.

Again, we have no idea when Bay 12 Games will decide the Steam version is ready and hit the button, but we’re certainly ready to get our mine on.