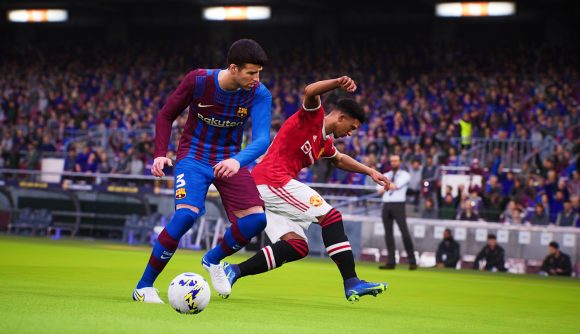 eFootball 2022 has had a rough time of things. After its abysmal launch, the football game became the worst-reviewed game on Steam thanks to a non-stop cavalcade of bugs and glitches. After some smaller fixes and updates, Konami announced their big v1.0.0 patch for November only to then delay it into the spring. Well, spring is now here, and the update appears to have arrived as promised.

The new update claims to have rebuilt both player and ball behaviour from the ground up, and offers players a whole host of new moves and skills at their disposal. There are new tactical team battles, crossover moves, and team defending tactics. A new system called ‘stunning kicks’ can be applied to most types of pass, cross, through ball, and shot to modify them to more pacey, direct, or powerful versions depending upon the situation.

Outside of the mechanical reworks, the other major introduction here is Dream Team, a new game mode that seems to be Konami’s replacement for the myClub mode of previous PES iterations. Players can build their own original team using in-game currencies to sign players and managers, train them to develop their skills and teamwork, and then compete in leagues against other players in 28-day phases. The first of these leagues is set to begin on April 21, giving players just over a week to prepare their squads.

The initial response on the eFootball subreddit appears to be that of lukewarm positivity. There seems to be a general agreement that the ball feel and flow of play does seem to have improved, but that it still feels lacklustre compared to the standards reached by previous PES entries. There’s also a general impression that the offering still feels a bit barebones, especially prior to the full launch of Season 1 next week.

As of now, the user review summary on Steam is still sitting at ‘overwhelmingly negative’ with just 16% positive reviews at the time of writing, one day after the launch of the patch. However, the recent reviews are sitting at a slightly more upbeat 36% positivity, with some users saying that their first impressions are that this is a step in the right direction, if perhaps not the complete overhaul they had hoped for.

Here’s hoping that Konami can turn that step into a greater leap in the coming months, because it’d be nice to have more than one notable football game on the market again.

If you’d rather play something a little more reliable in the meantime, we’ve got a list of the best sports games on PC to set you on the right track.