Elden Ring takes a while to complete, so it’s worth hitting up all the best Elden Ring quests in this open-world game. There are a few ways to unlock the other endings – several are unlocked by finding a specific type of Great Rune called a ‘Mending Rune’. These are obtained from various quests, so it’s worth noting which ones you need to finish.

It goes without saying, but this guide features major Elden Ring story spoilers, so please only continue if you want to get the best ending in Elden Ring. If you just can’t bear not knowing any longer, here are all six Elden Ring endings and the secret ending.

This is the normal ending to the game, you need to select ‘Mend the Elden Ring’ to unlock this ending and become the Elden Lord.

There are three alternate versions of the Age of Fracture ending, each one requiring a different ‘Mending’ Great Rune. You can choose to use a Mending Rune as the final option after you defeat the last boss, which will unlock a variant ending.

The Age of Duskborn alternate ending is unlocked by using the Mending Rune of the Death Prince. You get this Great Rune by completing Fia’s questline; you still begin the new age as Elden Lord, but the Lands Between loses the curse of immortality as the Rune of Death has been restored.

The Blessing of Despair alternate ending is unlocked by using the Mending Rune of the Fell Curse. You also begin the new age as Elden Lord, but you use the rune on Marika and watch on as the Lands Between are taken over by a curse. This isn’t a great ending, but if you really want to curse the already cursed world, then you need to complete the Dung Eater questline.

The Age of Order alternate ending is unlocked by using the Mending Rune of Perfect Order, obtained by completing Goldmask and Brother Corhyn’s questline. This is a simple, yet satisfying ending, as you restore order to the Lands Between while also starting the new age as Elden Lord, sitting on your golden throne enjoying some well deserved peace.

Lord of the Frenzied Flame ending

It’s important to note that you cannot unlock other endings once you do this, but you can reverse it, although the process is very long winded.To defrenzy yourself, you need to complete Gowry and Milicent’s questline in Caelid and use Miquella’s Needle at the boss Dragonlord Placidusax’s arena at Crumbling Farum Azula.

Now you know of its existence, you can try to avoid it, but if you’re still convinced and you want to see all your many hours and hard work go up in flames – literally. 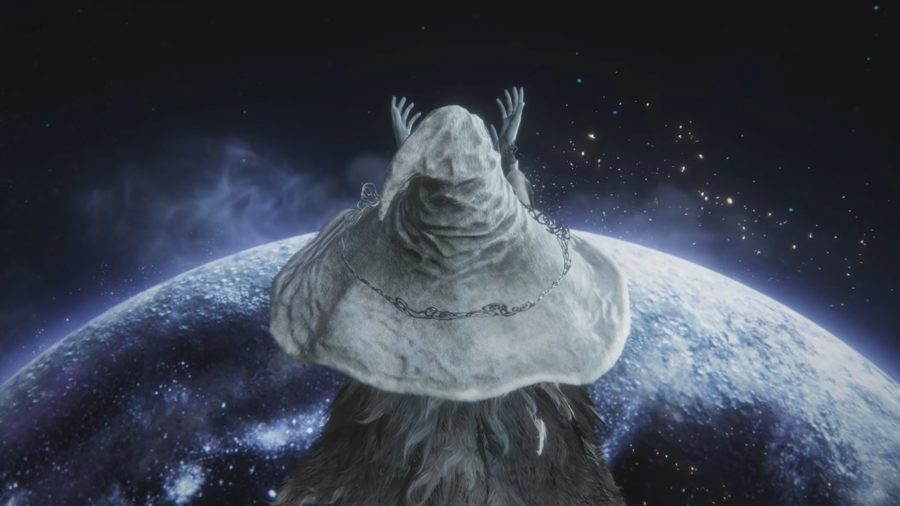 To unlock the Elden Ring secret ending, you need to complete Ranni’s questline. At the end of Elden Ring, you need to choose to trigger the Age of the Stars ending by using a summon sign on the ground after defeating the final boss.

This allows Ranni to become a God and replace Marika. You’ll become Ranni’s consort and ascend with her to the cosmos to free the lost souls trapped by the Erdtree.

That’s everything you need to know about every Elden Ring ending. For more Elden Ring tips, make sure you check out our guides to Elden Ring spells and incantations, Elden Ring weapons, and Elden Ring armor.