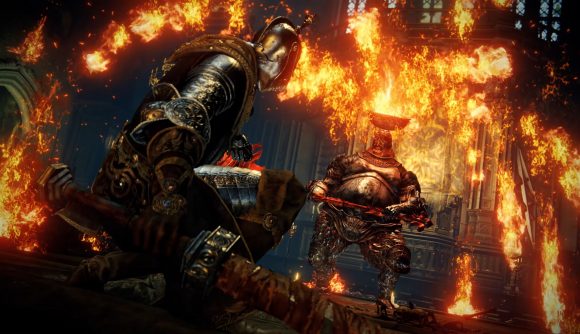 The ridiculously-eagerly-anticipated Elden Ring will be getting proper ‘from anywhere’ fast travel for the first time in a From Software title, according to a new interview – which also reveals that the developer is basing Elden Ring’s combat on Dark Souls 3, rather than the “steady, deliberate” style of previous games.

In an interview with Ungeek, From Software’s Yasuhiro Kitao reveals a load of interesting new details about Elden Ring. First and foremost is the confirmation that the game will have fast travel – and it won’t just be the checkpoint-to-checkpoint type of previous From Software games, as players can now warp from anywhere.

“The player is able to open their map anywhere on the overworld,” explains Yasuhiro Kitao, “outside of the dungeons, and select a previously discovered checkpoint – a Site of Lost Grace – and warp back to there”. This is due to the “expansive” nature of Elden Ring’s new open-world, which is the biggest From Software has ever created – and Kitao says From is aiming to “make it as dense as possible” so areas won’t just be empty space.

Kitao also talked about the game’s combat. While it has previously been described as “fundamentally different” from the Dark Souls series according to director Hidetaka Miyazaki, Yasuhiro Kitao says that the “speed of combat is closer to Dark Souls 3” – rather than the “steady, deliberate combat speed” of the first two Souls games.

Kitao adds that the “speed and aggression” first introduced in From’s Bloodborne, and refined in Dark Souls 3, is being used “as a base, sort of a starting point for [the combat in] Elden Ring” by the developer.

There’s a lot still to learn about Elden Ring, it seems, even with the game’s January release date fast approaching. It’s got a Steam page now, at least, so we can stop pinching ourselves to confirm it’s real. Who knows, we may even get that PC version of Bloodborne we’ve all been craving.