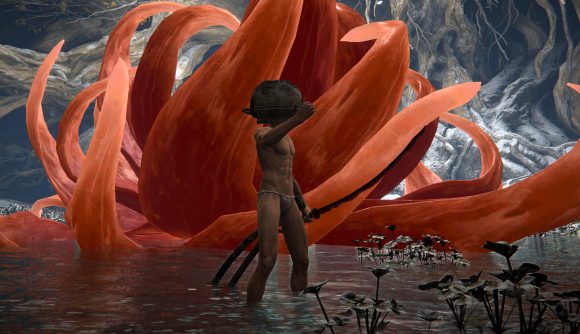 The famous Elden Ring Let Me Solo Her player – who can be summoned for co-op during the difficult Malenia boss fight and can take her down wearing nothing but a pot and a smile – is preparing a celebration stream as they reach a milestone of 1,000 Malenia kills. Solo, presumably.

As players explored FromSoftware’s excellent open-world game, it became obvious that – while boasting some of the best bosses From had ever made – the fight against Malenia at the base of the Haligtree was arguably the most difficult boss the developer had ever made, and many players struggle to defeat her.

Enter player Klein Tsuboi, who – with a lot of practice and death – managed to perfect their skills against the undefeatable swordswoman, then let other players summon his Let Me Solo Her character to let them sit back and watch as Tsuboi finished her off. Now, Tsuboi is preparing to celebrate their millenary of massacred Malenias as they near 1,000 versions of the intimidating boss slain. You’d think she’d stop coming back for more.

Tsuboi plans to stream this Malenia murder milestone on their YouTube channel tomorrow, May 10th at 5pm CEST / 4pm BST / 8am PDT / 11am EDT, so join if you want to see a hero at work.

Of course, what would be really impressive is if they beat Malenia with a Fisher-Price gaming pad. We can only hope.