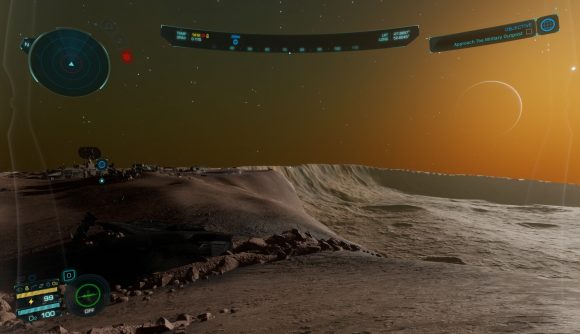 You can now set foot on the surface of countless planets in Elite Dangeous’ simulated Milky Way. Elite Dangerous: Odyssey has arrived, which allows you to hop outside your Cobra MkIII in the space game and explore planets on foot for the very first time.

When you fire Odyssey up for the first time, you’ll be treated to a crash course in first-person navigation planet-side. Your job is to infiltrate an enemy compound, which you’ll quickly find has already been overrun by… someone. Never mind, though – the goal here is to get inside, get the power restored, and download some critical data.

We’ve only had enough time with Odyssey to determine that yes, it works, and you do get to walk around like in a normal FPS game. Going into a building on foot in Elite is awfully exciting, though, and there are containers to loot and computer systems to hack aplenty. Getting the lights back on attracts the attention of the folks who’d cleared the place out earlier, though, so there’s a gunfight to deal with almost right away.

Some players have already had a chance to explore the Black on foot – the Odyssey alpha kicked off March 29 for players who owned or purchased the Lifetime Expansion pass or the Odyssey Deluxe Alpha pack.

For everyone else, though, that journey begins today. “See you planet-side,” developer Frontier writes in its announcement email. Odyssey is available on Steam, and you’ll need a copy of the Elite Dangerous base game in order to play.