EPOS has wasted no time in cementing itself as a premiere headset brand in the wake of its split from Sennheiser, standing tall as masters of the microphone. The EPOS H3 Hybrid tries to continue this legacy by riffing off the design of the original EPOS H3 that came out a few months ago, and while it succeeds in doing a little more than just cutting the cord, it might not be the best gaming headset out there for PC gamers.

Instead of chucking Bluetooth compatibility into its flagship headset and calling it a day, EPOS wants the H3 Hybrid to be a one-stop shop that pairs with virtually any device – and in some cases, two at the same time with one wired and the other wireless. It’s not the first to make multi-connectivity a headline feature, but I sure can’t see enough of it when the Nintendo Switch still requires you to run your voice chat through a third-party platform.

But if a PC is your main gaming device, it’s difficult to justify the $179 / £149 MSRP when the hybrid wireless connection comes with caveats and there are several alternatives.

Most gaming PCs don’t have Bluetooth built-in and the H3 Hybrid doesn’t ship with a dongle, meaning you don’t get the same level of convenience as a dedicated wireless gaming headset unless you already have your own receiver. Even then, you’ll need to be sure it’s modern to make the most of the H3 Hyrbid’s Bluetooth 5.0 support, as pairing it with older standards will introduce more latency. If your dongle’s up to scratch, however, you’ll benefit from a near-lagless experience that’s not quite as smooth as a 2.4GHz connection, but the latency is far less pronounced than the Bluetooth versions of old.

So, unless the stars align and you pack the right hardware or fork out for a newer receiver, you’ll likely benefit from keeping it wired to your PC through USB-C or its 3.5mm headphone jack. Even this choice comes with more strings attached, though, because the H3 Hybrid is a purely digital headset that relies on the battery to power its audio. 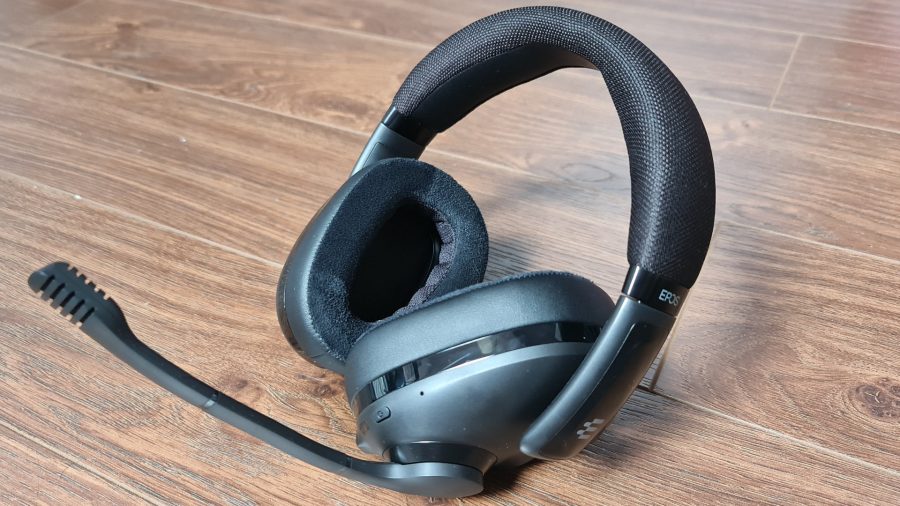 You don’t need to think about this if you stick with the USB cable, as your cans are practically always on charge. Otherwise, the headset lives up to EPOS’s battery life claims and you’ll only have to plug it in after 24 hours when using the 3.5mm connection, 37 hours through Bluetooth, and around 17 hours using the two simultaneously.

It’s not all compromises when using the H3 Hybrid on PC, as you can tap into the EPOS Gaming Suite to enable virtual 7.1 surround sound, which is pretty immersive when paired with the right game or movie. It doesn’t replace the fullness of a dedicated amp, but it’s better than many virtual alternatives out there and entirely optional given that the standard sound signature is well-balanced.

EPOS does well not to fall into the trap many competitors do, ensuring that the bass doesn’t overpower, but this slightly mutes the impact of explosions in the likes of Far Cry 6. The midrange and highs are clear despite the smaller 40mm drivers, with a nice tonal separation that makes it that much easier to pinpoint enemy footsteps in FPS games like Rainbow Six Siege. Generally speaking, the H3 Hybrid is a jack of all trades, suiting most types of games and genres of music. 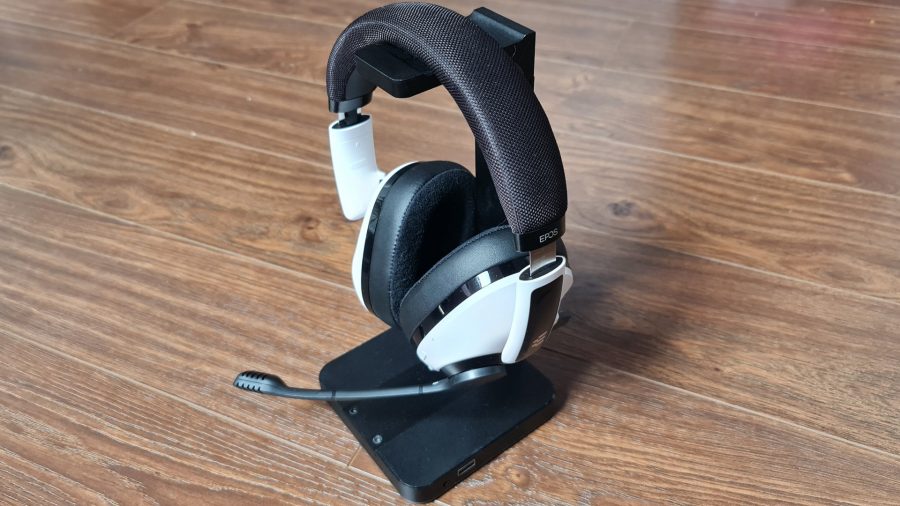 It’s similar to the original H3 with its volume dial on the right ear and flip-to-mute microphone on the left, but it actually has more in common with the EPOS H6Pro since the mic is now detachable. The headset even comes with a plate to cover the gap so you won’t look out of place wearing the H3 Hybrid out and about. The cans don’t twist inwards, though, so they won’t sit comfortably around your neck.

Sadly, the boom microphone quality isn’t as sharp as I’ve come to expect from EPOS. This isn’t to say your teammates will rush to mute you on Discord, as the H3 Hybrid’s mic still has a sense of clarity and detail that many other gaming headsets lack, such as picking up on the lower, deeper aspects of your vocals. That said, it introduces noticeable compression that surrounds your voice with static. You can tweak your microphone’s EQ settings from within the EPOS Gaming Suite software, but there’s no way to improve its quality, leaving something to be desired at such a high price point.

There’s also an internal microphone so you can take calls when your discrete boom mic isn’t attached. As you might expect, it doesn’t shine and often leaves your voice muffled as the noise suppression fits to quieten the traffic around you. But since there really aren’t many built-in mics that do much better, it’s nice to have the option. 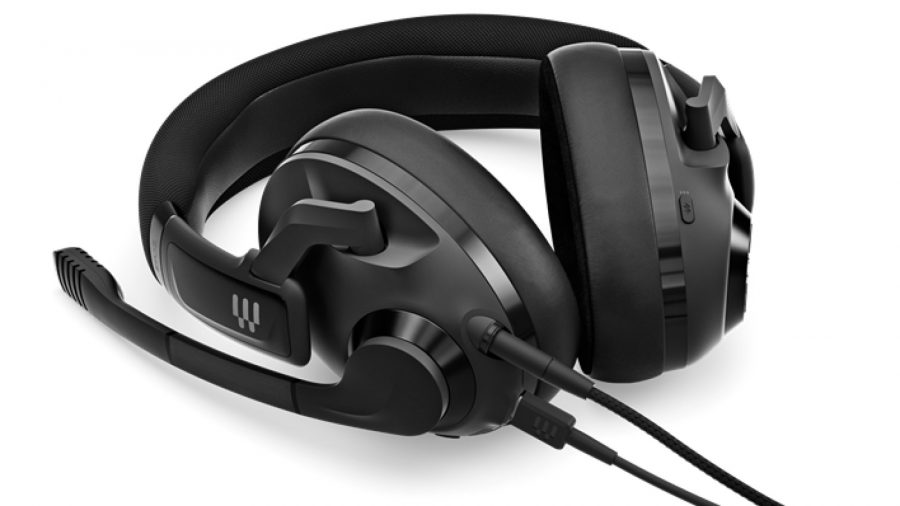 The cans are pretty solid despite an almost entirely plastic construction with a steel-reinforced headband. Like with previous models, this makes them lightweight to minimise fatigue from long sessions, durable against drops, and fairly flexible. The ear cups are a mixture of suede at the contact point to ensure it’s breathable, memory foam for comfort, and leatherette around the edges to make it last.

On paper, it has all the right ingredients for a winning headset, but comfort is more than just the sum of its materials. On one hand, the ear pads passively cancel outside sounds well to keep you from unwelcome distractions, but they’re also a touch too small for the average user. I have fairly little ears, but even I felt as though the H3 Hybrid was too snug at times and I can only imagine how uncomfortable these will be for someone with regular-sized ears. Of course, your mileage will vary, but comfort is a cornerstone that’s not to be taken lightly if you’re the type to wear your gaming headset for hours on end. 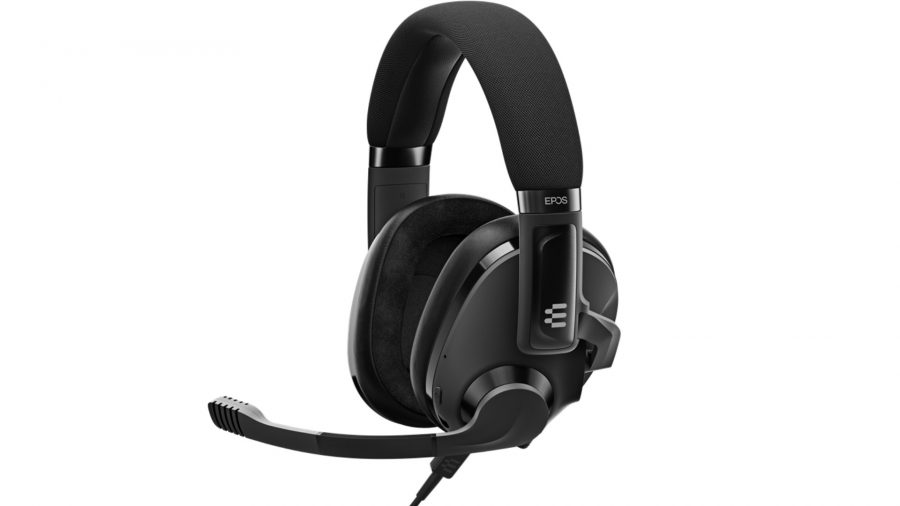 It’s clear that the EPOS H3 Hybrid isn’t a headset that fares well if you’re primarily a PC gamer, but it also struggles to hold its own against other multi-platform headsets, too. With its $179 / £149 MSRP, it’s just $21 cheaper than the SteelSeries Arctis 9 Wireless, which comes with a snappier 2.4GHz connection and Bluetooth, so you can connect to two devices with or without the cord. It’s also a whopping $80 more expensive than the SteelSeries Arctis 3 Bluetooth, which admittedly has a shorter battery life and a muddier microphone, but is much more comfortable and has the same multi-connectivity tricks.

Overall, the H3 Hybrid doesn’t quite find its feet with an eye-watering price tag in an already competitive market. That said, the arrival of these new cans has knocked the original EPOS H3 down in price to a much more palatable $99 / £89, showing that this might be less of a sore spot in the future. Comfort, however, is the true Achilles’ heel, as this is a fundamental issue that can’t be so easily changed – although EPOS could potentially use the hot swappable nature of the ear pads to address this. If this isn’t a deal breaker for you, however, the H3 Hybrid offers fantastic sound quality, a comparatively good microphone, and an industry-leading battery life.

It struggles with comfort, sporting ear pads that are slightly too small for the average user. Multi-connectivity with Bluetooth is a welcome addition to the original design, but at such a high price, there are better options for PC gamers.