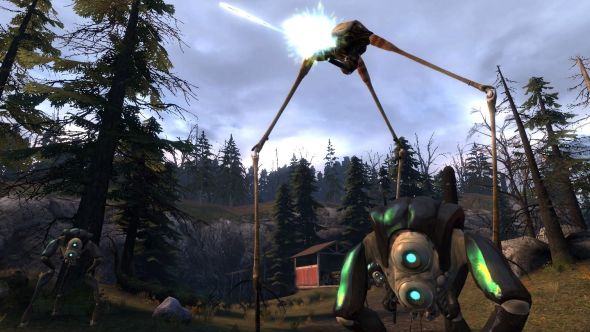 Erik Wolpaw, who co-wrote Portal, Portal 2, Left 4 Dead, and both the Half-Life 2 episodes, is back at Valve.

The news comes to us via Trenchman on Reddit and known Valve watcher Tyler McVicker. Trenchman had noticed that Wolpaw is listed in the credits for Artifact, the digital card game which Valve released in November last year, and followed up in an email to the studio’s head Gabe Newell. That email, which McVicker tweeted, says simply “he’s back”.

Wolpaw first left the studio in February 2017. His departure was one drip in a steady trickle of writing talent from Valve that had fans despairing about its future as a games developer – Wolpaw followed Half-Life’s lead writer Marc Laidlaw out of the door, and was followed by Chet Faliszek and Jay Pinkerton. Happily, it now seems the traffic is flowing in the opposite direction, as Pinkerton also returned to the company at the end of July last year.

After years of investment in VR and Steam, Valve has said that it will start making games again, and Artifact is just the first. There’s one big project that many players are probably still hoping to see, and indeed there are signs that Valve may return to its most famous IP with a VR prequel for Half-Life.

Read more: the messy story of Half-Life 3… so far

Newell has also confirmed that Valve are working on three VR games. While that would be great and all, especially if one is a Half-Life prequel, I’m pretty sure I’m not the only one hoping for something more traditional from Valve, too. Hopefully the return of some of the studio’s best and wittiest writing talent is a positive sign in that regard.