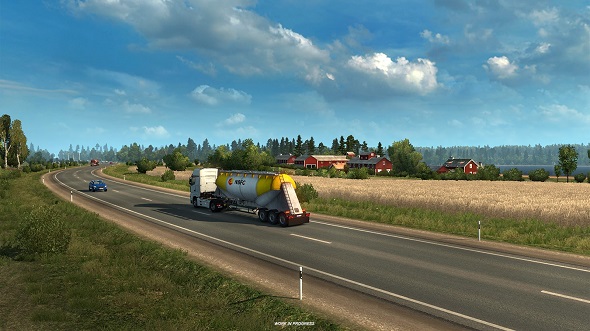 Euro Truck Simulator 2 has always been a pleasant, meditative experience – think of it like Elite Dangerous, but on the ground and without CQC. Euro Truckers will soon have new routes to explore around the Baltic Sea as the five-year-old title adds another expansion.

If semi-trucks are a bit too slow for your taste, try something from our list of the best racing games for 2018.

Tentatively called Beyond the Baltic Sea, the new DLC expansion will include all of Latvia, Lithuania, and Estonia, albeit on Euro Truck’s somewhat-compressed scale. It’s also adding in some of southern Finland, plus enough Russia to open up routes to Saint Petersburg.

In the blog post announcing the expansion, developer SCS Software say they’re creating new, unique architecture, infrastructure, and industrial needs for the region, and that it’ll be “an area that will be very different from the rest of the world we have so far.”

There’s no release date announced yet for Beyond the Baltic Sea, but its launch will be a nice opportunity to haul some logs and catch up on podcasts.