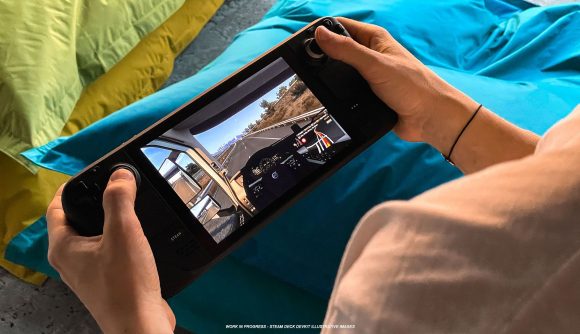 With the Steam Deck release date rapidly approaching, we’re hearing more and more about what we’ll get to play on Valve’s handheld when it arrives. Now, the folks at SCS Software have given us an idea of what’s in store for American Truck Simulator and Euro Truck Simulator 2 in the way of ‘Deck support – and the good news is you’ll be able to dive in with your pals on other platforms.

“In addition to making some tweaks necessary to support this handheld gaming PC, our games will include several special bindings, along with a basic version of touchscreen support (clicking on the screen to select menu buttons),” the devs explain. “Moreover, we’d like to point out that by choosing to play on Steam Deck you will not be left behind when you will want to drive along with your friend in the Convoy mode, as ‘cross-platform’ gameplay will be supported.”

Convoy mode was introduced last year, and lets truckers create private online games for up to eight players, with synchronised AI traffic, time, weather, and truck customisation options. Oh, it also features a push-to-talk CB radio option so you can natter with your fellow truckers if the lonesome approach isn’t for you. Exciting news then that the Steam Deck port will offer the chance to dip into Convoy with PC pals.

The devs add that the work that went into Truck Sim Steam Deck support went “hand-in-hand” with their efforts on “overall gamepad support”. This has resulted in some general, minor improvements and a new mini-feature that enhances gamepad mapping. “Simply put, this means you will have a bindings legend on the screen to always be sure which button has what purpose,” SCS says. The studio notes that it hopes to push gamepad and steering wheel support “further” in the future.

“We hope you will enjoy playing ETS2 or ATS on the Steam Deck and we can’t wait for your feedback on your experience,” the devs say.

If you’re excited for the arrival of Valve’s handheld, you can read up on how to check the Steam Deck compatibility of your Steam games and the Best PC games to play on Steam Deck at those links.