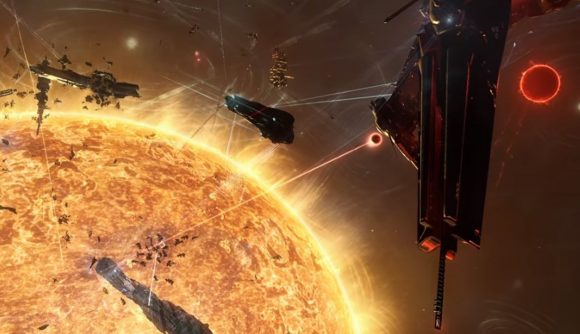 Hundreds and hundreds of EVE Online players rallied together this week to give terminally ill member of the community a special birthday. The orchestrated battle saw thousands of ships blow each other up to give the cancer-suffering player a light show only the free PC game can deliver, and a unique birthday card to top it all off.

In a report from PCGamer, EVE Online player Chappy78 discusses how one of the worst weeks of his life ended in spectacular fashion. The 42-year-old veteran was told his pancreatic cancer had returned, and the odds were survival were not in his favour. As a long-time EVE Online player, he turned to his space-faring community to try and redeem his birthday. The initial idea was to have a small dog-fight among friends, but thanks to a thread on the CCP Games official forums, it became one of the highlights of the year.

Some 2,000 players showed, ready to battle, and the ensuing carnage was suitably ridiculous. To generate an EVE Online-specific keepsake, Chappy78 asked if all the players would eventually stop fighting, and aim at him, so he could get a killmail (EVE’s death reports) with everyone’s names on it. They couldn’t quite fit everyone, but over 700 were name-checked in the resulting killmail. “It was unbelievable,” Chappy78 says in the PCGamer article. “I have done a lot of things, and I have fought in a lot of major battles [in EVE Online], but I have never been in a battle that big and that outrageous.”

You can find images of the skirmish on Reddit, as well as this lovely thread of well wishes. Here’s a video of the action, too:

EVE Online reported an all-time peak of concurrent players earlier this year, amid the third chapter of its Invasion story. You can find it on Steam if you’d like to give it a try.