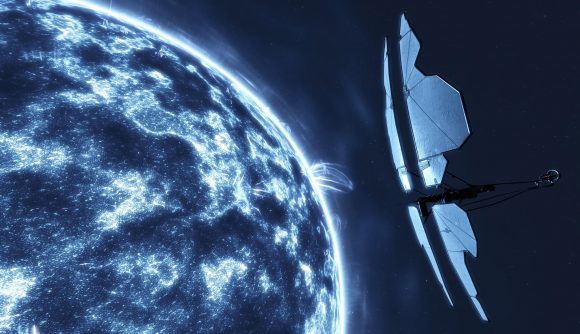 Eve Online, the massive space game that’s been host to the biggest and costliest battles in videogame history, is now available on the Epic Games Store. Along with expanding to the Epic store, Eve has also gotten a revamp to its new player experience, and developer CCP is running a celebratory limited-time event to mark the occasion.

When you start a new character in Eve Online now, you’ll meet a new corporation called the Association for Interdisciplinary Research. The new AIR training program takes rookie capsuleers through the basics of Eve Online, and CCP says it’s “the result of careful introspection of previous iterations of Eve’s new player journey.”

This new introduction to Eve is much more narrative focused than past iterations of the MMORPG’s onboarding process have been, and CCP says it’s built this new ‘tutorial’ chapter in a way that will allow the studio to quickly make changes and add content in response to player feedback. The studio has also added new camera tools to make things look more cinematic and immersive, and the complex UI is revealed bit by bit as players make their way through the AIR storyline.

Another nice new feature for new and old players alike are Eve Online’s new skill plans. Using this tool, you can build a ‘roadmap’ of skills and test out different builds, similar to the way you can experiment with ship builds in the fitting interface without actually buying all the parts you want to test.

The new Researching the Rogues event is live! What are you looking forward to doing during this event the most? 🔬 https://t.co/WgheMbi2mk#EVEOnline #tweetfleet pic.twitter.com/cFSCSbQfPf

To mark Eve Online’s Epic Games Store launch, there’s a new ‘Researching the Rogues’ event live in New Eden. There are free login bonuses and rewards on offer for participating in the event, which involves tracking down and researching various rogue drones spotted in combat sites and exploration anomalies scattered about the galaxy.