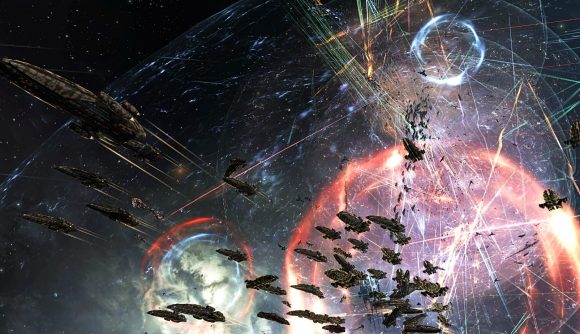 It seems that the war that has raged across Eve Online for the past year is coming to a close. On Tuesday, the PAPI Coalition signaled to its thousands of members that it was pulling back from Delve – the last redoubt of the Imperium, better known within the space game as the Goonswarm.

The Goonswarm had spent the past 13 months under siege from the combined forces of the Pandemic Horde, Fraternity, Test Alliance Please Ignore, the Brave Collective, and a host of other smaller player-controlled factions within Eve’s complex and fractious community. United under the banner of ‘PAPI’ (a confusing portmanteau cobbled together from the ‘P’ in Pandemic and Test Alliance’s acronym, TAPI), these groups had sought to capture as many Imperium systems as possible and eventually topple the Goons’ base of operations in Delve.

Over the course of a year, the combined PAPI forces gradually fought the Imperium into a smaller and smaller area of New Eden, eventually cornering them in a tiny cluster of just seven solar systems. But Eve Online community developer Peter Farrell tells us the Goonswarm managed to prevail – in part by keeping its recruitment numbers up, and in part by leveraging its institutional expertise in narrative creation.

“The PAPI strategy was to surround them, earn some money in the process, disrupt some supply lines, and then poke and prod into this fortified constellation to see if they could make any headway,” Farrell tells us. “And it seemed like they had taken their foot off the gas in the last month or two.”

This was, Farrell suggests, partially down to pandemic-related restrictions lifting in many areas, combined with the month of UEFA Euro 2020 championship football matches.

“But about two weeks ago, the [PAPI] leadership came to their members and said, ‘I know it’s been a little bit quiet, but we’re gonna do this – we’re gonna finish this off,'” Farrell says, explaining that PAPI had reached a point where its leaders were ready to bet everything on a final offensive to either swiftly win the war or be left unable to continue fighting. Either way, World War Bee II would be over.

However, when PAPI leaders looked at their recruitment and retention numbers, they realised they had not seen as much of an uptick as they had initially estimated. Meanwhile, the Imperium’s numbers had swelled. PAPI’s prospects in a final, glorious battle were starting to look a bit grim.

A few members of the large PAPI confederation had already decided to start moving key infrastructure back out of Imperium space by the time leadership gave the official word August 2. The Goons, watching as the besieging forces were beginning to pull back, decided to go on the offensive.

There’s been no official declaration ending the war – no negotiated peace, in other words. So the situation as it stands is Imperium forces swiftly moving back into systems they had lost to the invaders over the past year.

“It’s not something that’s ‘over’ by any means,” Farrell says. “As the PAPI forces are trying to withdraw, right now they’ve got safe infrastructure to withdraw through. But the Imperium is not resting on their laurels. They’re saying, hey, you attacked us. You came into our home, you made life difficult. We’re not going to let you leave that easily.”

Since August 2, the Imperium has rapidly moved to recapture systems it lost to the invaders over the course of the past year. Farrell says the Goonswarm is currently in the process of bringing more than 90 systems back into its orbit. Significant battles have been popping off across the conflict zone, and it’ll likely take some time for things settle back down.

So while World War Bee 2 seems to be winding down, it’s hard to say precisely when – or if – it’s actually ending.

“Really, it’s just a matter of trying to figure out what happens next,” Farrell says. “And we have no idea. One of the cool parts is that we have no idea how it’s going to play out next – this isn’t scripted. Who knows where the next war is going to start? Maybe it’ll be immediately after this one. Maybe everyone will take a break and just have a little bit of relaxation and try and build up those war coffers a bit. But maybe they won’t! We have literally no idea.”