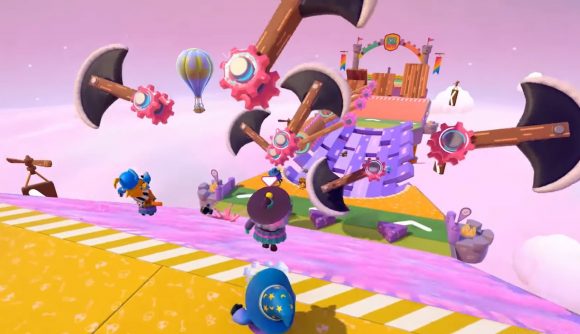 The unofficial Year of the Bean continues to go from strength to strength. The Among Us player count has reached over a million concurrent imposter and crewmate beans, and Fall Guys: Ultimate Knockout is now so close to Season 1’s finish line that not even the combined powers of Big Yeetus and Thicc Bonkus could knock it off track. Now, developer Mediatonic has revealed four new medieval-themed Season 2 skins, ready to let our chivalrous beans be the best darn beans they can be.

The four skins are as follows: first, there’s an orc with scaly green skin, trying to look menacing but not really pulling it off because, you know, it’s a Fall Guy. Next, there’s a carnivalesque horse decked out in barding. Third, there’s a colourful jester, complete with a jangly jester’s cap. Finally, there’s a princess with a golden tiara, the fanciest bean of all.

All this lines up with the medieval-themed stage we’ve already seen revealed. ‘Knight Fever’, as the stage is called, features swinging axes and spiked logs, sure to deflate your hopeful Guy in an instant.

Cast your shockingly-expressive-considering-they’re-basically-just-stretched-dots eyeholes towards the skins below:

With beans taking battle royale games and social deduction games by storm, what hope is there for any game released in the near future that contains not a single bean? It’s Can You Pet The Dog? all over again.