Beautiful beaches. Swaying palm trees. A half-eaten, rotten shark surrounded by ghouls, presumably still wearing the same sunglasses they did when the radiation turned them all flakey. Truly, the stuff that unforgettable holiday dreams are made of. A new environmental showcase trailer for the seriously impressive-looking Fallout: Miami mod for Fallout 4 has all of the above, plus drunken bar fights, and some seriously annoyed-looking mutant alligators.

First announced in 2018, the “DLC-sized” mod has been a considerable undertaking, but if the new trailer is anything to go by, it’s been well worth the wait. Last year, the team opted to start over with a new world to better optimise the final release. If you’re eager for a sample of what that finished result will end up looking like, that early version is still available to download.

Note that you’ll need Fallout 4 and every official DLC expansion to run the mod. Once installed, you’ll find a bus at the southeastern edge of the Commonwealth which will allow you to access Miami.

As well as the new location, Fallout: Miami’s creators aim to feature a whole new main quest, plus sidequests, and new companions. It’s all based on that mainstay of the Fallout franchise: wars between competing factions.

“The once-great slaver kingdom of Sunshine Cove has recently come under threat by a horde of automobile-worshipping nomads calling themselves the Nuclear Patriots,” reads the site. “While Miami’s various factions vie for control over the Vacation Wasteland, a long-forgotten remnant of the old world slumbers beneath the waves, waiting for an opportunity to reclaim America once again.” 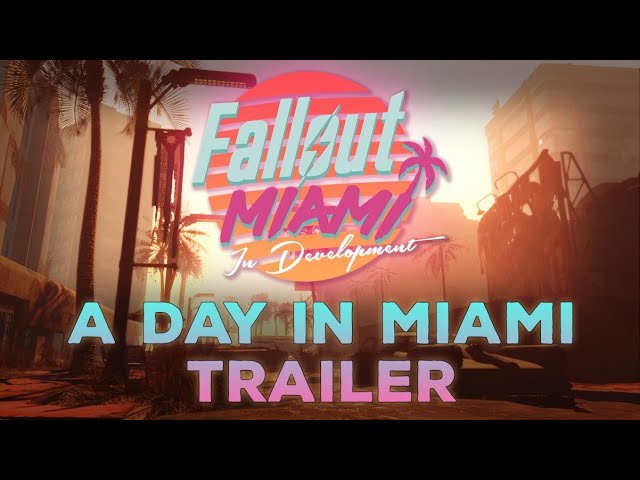 As excellent as this all sounds, it’s clearly just a lead-up to the main event. That’s right. Fallout: Miami features – among other new enemies – mutated flamingos. We recently saw mods that added Horizon Zero Dawn’s Aloy and the Halo Infinite Brute to the game, but I’m not so sure I fancy even their chances against these terrifying mockeries of nature.