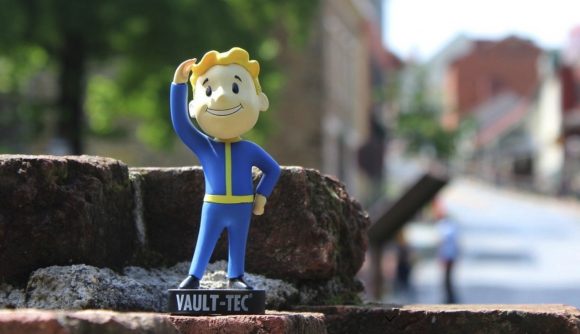 The document says that Governor Justice does “hereby proclaim November 14, 2018 as Reclamation Day in the Mountain State and encourage all citizens to visit West Virginia and explore the diverse set of featured sights and destinations in the game and extend your stay outside Vault 76 to discover all the Mountain State has to offer.”

What’s that mean in practical terms? Er, nothing, really. West Virginians aren’t getting any extra time off work to play Fallout. The proclamation notes that “West Virginia and Bethesda Studios have an official partnership to promote the game,” and this is just an extension of that partnership – but the co-marketing doesn’t end there.

WVTourism.com, the official web destination of the state’s tourism board, now has an entire sub-site devoted to Fallout 76, complete with an interactive map that directs tourists to the real-world locations that inspire the places you visit in-game. Smaller, unofficial tourism organizations got in on the new West Virginia interest early, and the official tourist board announced a partnership with Bethesda last month.

West Virginia is hardly the first real-life location to be featured in a videogame, but it’s rare to see anything other than a major city be depicted in any real detail. That’s why Fallout 76 has caused such a stir for West Virginians – nobody ever expected Camden Park, for example, to suddenly by the subject of international attention.

Thank you West Virginia! Your beautiful state has been an incredible canvas for #Fallout76, and the support from your community has been truly wonderful.

While official sources might serve as better guides to actual West Virginia, our looks at Fallout 76 public events, Atoms challenges, and perk cards will give you a better chance of surviving the post-apocalyptic version. I don’t think there are any Super Mutants in the real state – not yet, at least.