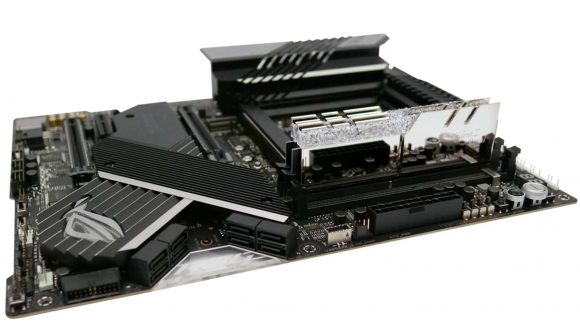 While DDR5 RAM production is in full swing, preparing for Intel’s Alder Lake CPUs, G.Skill has proved that the current generation of memory still has some life in it by announcing a number of high speed consumer DDR4 modules. Taking the high-frequency crown from Crucial’s DDR4 Ballistix Max, G.Skill’s latest and greatest consists of two 8GB sticks with a record clock speed of 5333MHz – which is now the fastest RAM on the market.

The sticks are designed to work on the new and improved Z590 chipsets, making use of Intel’s latest Rocket Lake CPUs. Pairing an Intel Core i9 11900K with an ASUS ROG STRIX Z590-E motherboard, the new RAM set a record-breaking stock frequency, but with a CAS latency of 22, it’s not quite as refined as Corsair’s 5000MHz kit with a latency of 18.

G.Skill also revealed a 32GB set for higher capacity requirements, which still maintains a respectable 5066MHz frequency. All the new sets will be available in both its RGB and non-RGB variants.

The 5333MHz set won’t come cheap, however. Crucial’s 5100MHz variant retailed for $899.99, so don’t expect this to appear on our list of the best gaming RAM any time soon with a similar outlandish price.

The new kit is expected to come to market by April, where we might see whether the already-stretched RAM can be overclocked further. The current DDR4 record goes to a set of HyperX RAM, clocked up to 7156MHz.