In April, one of the most influential and beloved role-playing games ever made will get a full reimagining, bringing the city of Midgar to glorious new life in the Final Fantasy VII Remake.

Square Enix, now a very different company than it was back in 1997, has been up front about the fact that it won’t just be the game’s dated visuals that will get an update, but its combat, exploration, and progression systems, too. More controversially, Square Enix has admitted that story elements will also change, which has raised an understandable degree of concern among long-time fans.

In the years following Final Fantasy VII’s huge success, the game’s spiky-haired protagonist, Cloud Strife, has become an easy target for message board snark, seen by many as the archetypal effeminate anime hero in both his androgynous look and introverted personality. Now that some gaming communities have wrenched themselves free of this kind of cynicism, it’s worth acknowledging that Final Fantasy VII has always portrayed male heroes not only as well-formed and multifaceted characters, but also as alternatives to toxic masculinity, demonstrating sensitivity, vulnerability, and compassion.

JRPG protagonists typically experience a fairly basic ‘hero’s journey’ and while there are elements of Joseph Campbell’s eight-step framework at play here, Cloud’s character arc is a little different. He enters the narrative as a fully formed hero archetype, and is subsequently deconstructed over the course of the game, until a Fight Club-esque twist reframes his place in the story.

When we first meet Cloud as Avalanche storms the first Mako Reactor, he appears cold and disinterested in the moral crusade of the eco-warriors. Initially, Cloud’s attitude is similar to that we would expect from a gruff Marcus Fenix-type – he is stoic, guarded, and reluctant to show emotion.

So far, nothing out of the ordinary, right? But this facade begins to crack as Cloud suffers episodes of mental distress that resemble symptoms of post-traumatic stress disorder, and allow small glimpses into his troubled past through a recurring internal voice. It becomes clear that Cloud’s aloof nature is driven by a myriad of repressed issues, stemming from his failure to live up to the ideal he set for himself: that of an elite soldier, modelled after and embodied by the game’s villain, Sephiroth.

In flashbacks to Cloud’s childhood, we see his shyness in contrast to his friend Tifa’s exuberance. From this moment and throughout his life, Cloud is unknowingly in the grip of an idealised view of masculinity, telling Tifa that he’s going to leave town to be “the best there is, just like Sephiroth.” Cloud ultimately fails to live up to this ideal, with tragic consequences. 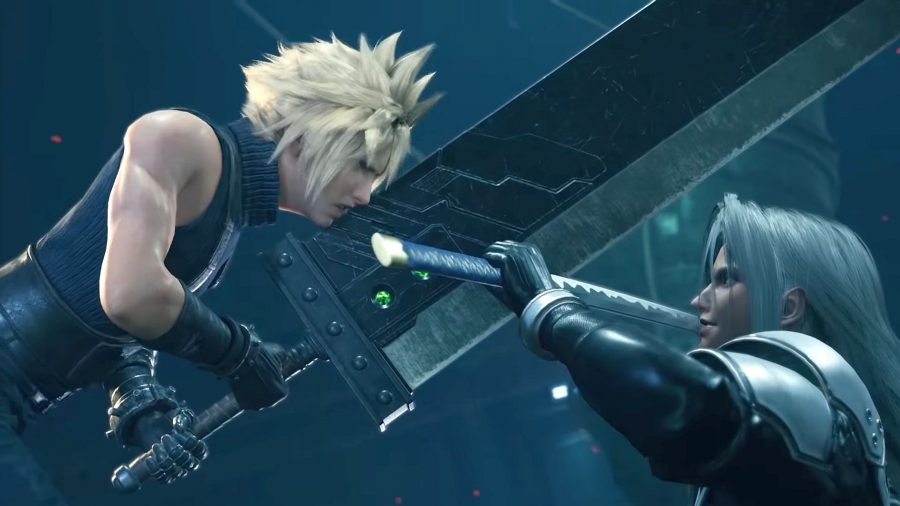 As a cripplingly shy adolescent, I felt a kinship with Cloud, as I struggled to form relationships with my peers. This tender side to Cloud is developed in his relationship with Zack, one of the few characters to genuinely care for him in the cold corporate world of their employer, the Shinra Electric Power Company.

Almost all the characters are driven by the loss of, or alienation from, their families - especially Sephiroth

Final Fantasy VII also has a curious approach to romantic relationships. Both Aerith and Tifa display affection for Cloud, but his relative disinterest in pursuing either of these eligible young ladies has led many fans to speculate that he could be gay. There’s certainly some evidence in the text to support this, and this fire has been fanned by spin-off games (see Cloud and Zack’s tearful embrace at the end of 2007’s Crisis Core). Many fans have also picked up on the undeniable sexual tension between Cloud and the equally androgynous, almost Bowie-esque Sephiroth, leading some LGBT players to identify with Cloud’s arc. In a similar vein, some transgender players have noted that the game’s exploration of identity has mirrored their own experiences.

For more excitement: see the best action-adventure games on PC

It’s unlikely that the game’s creators intended a queer reading of Cloud, but the fact that such an interpretation is even possible immediately separates him from almost all of the Final Fantasy protagonists to follow, who are primarily motivated by a heterosexual relationship (see: Squall, Zidane, Tidus, Noctis, etc) which is at the core of their character development. Of course, there is nothing wrong with basing a story around a romantic relationship, but the fact that Cloud is driven by platonic relationships is a refreshing angle and one that resonates with many players. 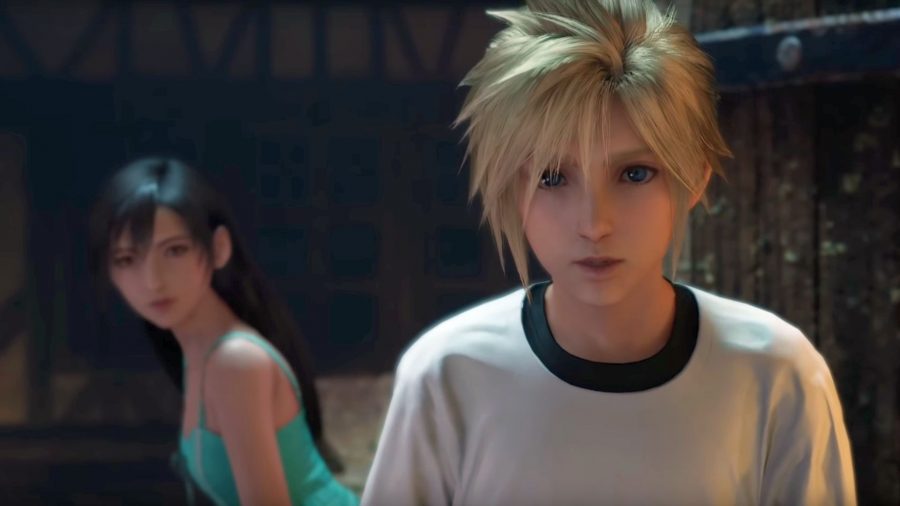 For Final Fantasy VII, series creator Hironobu Sakaguchi drew from his own pain after the death of his mother a few years earlier, and this feeling of loss permeates the story. It’s no coincidence that traditional family units are almost non-existent in FF7’s world. Almost all the characters are driven by the loss of, or alienation from, their families. It’s clear that Sakaguchi was exploring aspects of his grief through these themes, resulting in the darkest game the series had yet seen.

This is most obviously manifested in Sephiroth, whose crisis of identity causes him to go on a destructive quest with his symbolic ‘mother’, Jenova. Sephiroth was arguably the most sympathetic villain the series had offered to date, making his descent into madness all the more chilling. In contrast, Cloud, who was raised without a father, turns to his adoptive family – his fellowship of companions – who rebuild his fractured identity by accepting his weaknesses and flaws. 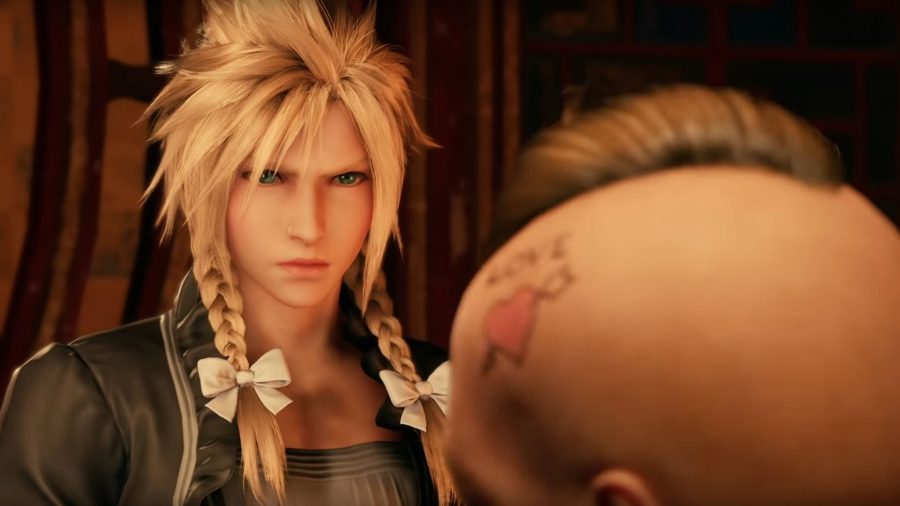 I would be remiss not to acknowledge that Final Fantasy VII has its share of problematic moments, too. The bizarre Honey Bee Inn sequence has a number of anachronistic gags at the expense of both gay men and sex workers. Times have changed and certain elements will need to be updated in the interests of taste and tone, so let’s hope for that. Without a doubt, there will be a certain subset of fans bleating about censorship if any trivial plot elements are omitted from the remake but this shouldn’t distract from the real heart and soul of the story, which absolutely deserves to be preserved in its retelling.

For more epic quests: see the best MMOs on PC

Final Fantasy has always been about diverse individuals coming together to defeat evil, and rarely has a cast been more diverse than Final Fantasy VII’s ragtag team. As the beating heart of this ensemble, Cloud was a hero who learned to love himself and others by opening himself up to the pain of his past. Without his friends, Cloud would have failed, but by accepting them and the help they offered, he gains a strength that allows him to overcome his demons – both mental and, in the form of Sephiroth, physical. At the core of the story is a tale about the fragility of the male ego and the redemptive power of openness, which, if done right, could resonate every bit as deeply with modern audiences as it first did 23 years ago.

Oh, and can we get a PC version of the Remake please, Square? Thanks.