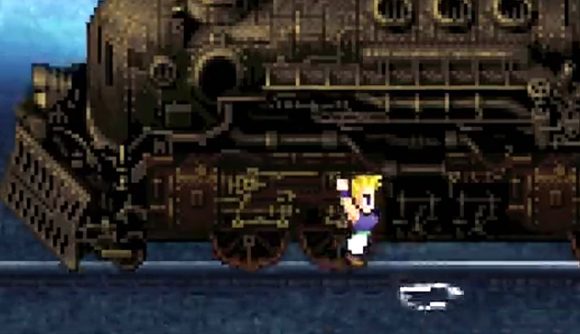 The greatest moment in any Final Fantasy game is inarguably the much-memed Final Fantasy VI train suplex, but unfortunately, the upcoming Pixel Remaster out this month seems to have ruined this fantastic moment – and what’s worse, Square Enix is advertising it.

Earlier this week it was revealed that the Final Fantasy VI Pixel Remaster would be out on February 23 – first by accident, and then properly confirmed by Square Enix. It’s been delayed several times but now finally looks to be coming out at last, and the first screenshots seemed to be promising.

The Final Fantasy Pixel Remasters offers “completely new graphics” in a remastered retro pixel style, and so fans were hoping for a bit of a step-up over the previous remasters. Square Enix took to Twitter today to show off Final Fantasy VI’s famous meme of the ghost train boss receiving a suplex by Sabin – however, this wasn’t quite the win the publisher was hoping for, as fans quickly spotted that all wasn’t right with the famous wrestling move.

As you can see in the video below, Sabin still carries the train off-screen and slams it into the ground, but the train remains the right way up throughout. In a suplex, the opponent is supposed to end up on their back – which is what happens in the original SNES version, as the train is flipped when it comes back down. This is both funnier and more accurate to the name “suplex” than the new version, which just feels wrong.

shouldn't the train sprite turn upside down as well? pic.twitter.com/CkCjwpLIn6

The train suplex is really is one of Final Fantasy’s greatest moments, so hopefully this oversight will be fixed as we approach the Final Fantasy VI Pixel Remaster’s release date on February 23.