Looking to improve your Football Manager 2018 tactics? Only a handful of football managers can claim to have genuinely added anything to the world of football tactics. For every innovator in the vein of Arrigo Sacchi, Pep Guardiola, Helenio Herrera, or Minus Richels, there are hundreds of examples of Mark Hughes, Gian Piero Ventura, or Alan Pardew – disciples of continuity dedicated to duplication.

Where the innovator is blessed with enduring legacy, the duplicator is cursed to mortality and fleeting importance.

Many of us play Football Manager 2018 to create a dynasty with our chosen team, and the pursuit of tactical excellent plays a key role in the ambition. To help you out with that, what follows is a rundown of the best new Football Manager 2018 tactics options, each of which gives you greater ability to personalise your tactics and better reflect your goals in your team’s presence on the pitch. 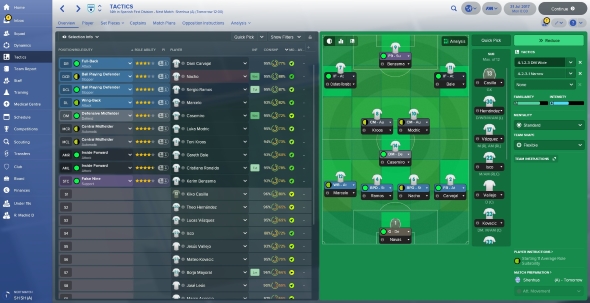 New player roles are too numerous to list and detail here in full, but they are too important not to mention in a Football Manager 2018 tactics guide. Used creatively, some of these new roles provide a great chance to take opponents by surprise – not least when employed in leagues in which they are unfamiliar.

Of the new entries, the Inverted Wing-Back and Segundo Volante are two of the most interesting.

The Inverted Wing-Back role is one that Guardiola at times employed this season at Manchester City, his full-backs looking to drift into the middle of the pitch when his team has possession. Full-backs typically stay wide, but here the goal is to draw the other team’s midfielders into more central areas to provide more space around the box and along the touchlines for your attackers and midfielders to exploit.

The Segundo Volante is a combination of the Box-to-Box Midfielder and Ball-Winning Midfielder roles. Segundo Volantes must be adept at both winning possession and covering a large area of the pitch, and they are also expected to be able to run with the ball with a view to driving towards the opposition and panicking them.

In the interest of providing defensive cover, you should play a Segundo Volante alongside a midfielder disciplined enough to remain in a deep-lying role when your team is attacking. 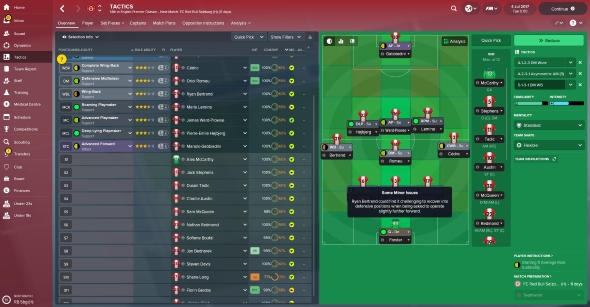 A new overlay available for the Football Manager 2018 tactics screen pitch provides a colour-coded insight into which areas of the pitch your tactic is having a positive impact, and in which it is not. A red square represents a failure to cover the space. Green squares represent good coverage.

Whilst you can turn a red square into a green one by changing your formation in whole or in part (by repositioning a single player, for instance), you don’t always need to take such drastic measures.

Hover your mouse over a red square and a pop-up provides information on what is causing the problem. In the image below you can see that the red square below Southampton’s Ryan Bertrand is caused by a concern that his offensively-focused full-back role makes it more likely that he will be caught out of position should the opposition launch a quick counter-attack.

Such issues might be able to be fixed by altering a player’s role, or changing their mentality. This allows you to retain the overall shape of your team and keep your preferred picks in the starting 11 on match day.

You might even choose to ignore the red squares, feeling safe in the knowledge that your concentration on other areas of the pitch is worth inferior coverage elsewhere. Whatever the case, the grid provides a means of analysing your team – it is up to you to do the right thing based on that information.

The grid is not the only tweak made to the Football Manager 2018 tactics pitch. You will also come to notice that green lines appear as links between certain players on your team. These lines highlight that the players in question have a strong partnership, resulting from playing in positions and roles that complement one another and from working well together in recent games.

Partnership lines do not appear immediately. Connecting with lots of passes to each other, providing assists, and similar acts of teamwork are required before they are achieved.

If you do see players developing strong partnerships then you might want to think twice about bringing in that new signing or rushing an injured star back into the first team.

Instruct players personally, or by position 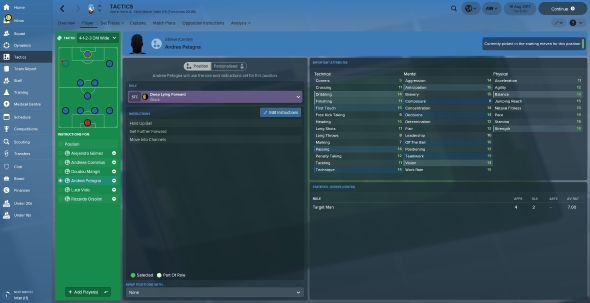 Instructing your players is an important Football Manager 2018 tactic. The act of issuing instructions to individual players has been gifted its own screen, making the task a whole lot more intuitive. Even better is the option to deliver a set of instructions either to a specific position, or to the individual player currently occupying.

As such, you can much more quickly make substitutions and swap players in and out of your team once you have done the initial legwork of setting your desired instructions.

You might have two very different types of striker, for example, and so a default set of instructions for the one striker you play in your formation isn’t going to work. The big, physical striker is not going to play well if told to approach the game in the same way as his smaller, trickier alternative.

Alternatively, you might be a stickler for a very specific approach and so you set all of your player instructions according to the position rather than the player in it. In this way you know that whoever plays is going to adhere to your design.

A new ‘Analysis’ tab has been added to the Football Manager 2018 tactics menus, providing summaries of your performance in previous games.

For example, you can view a breakdown of which formations you have faced and the number of chances you have created and given away for each one. Exactly when and where you have scored and conceded goals during matches can also be investigated, as can information relating to the impact of your team talks, shooting positions, and the key trends of an upcoming opponent.

Much of this information was available in last year’s Football Manager, but the vastly improved presentation of it here makes it far less time-consuming to digest and easier to act on.

Essentially, you have got fewer excuses than ever to be unaware of your weaknesses or to be taken by surprise by a foe.

Those are our Football Manager 2018 tactics tips. Got any further guidance for budding gaffers? Why not share them in the comments?