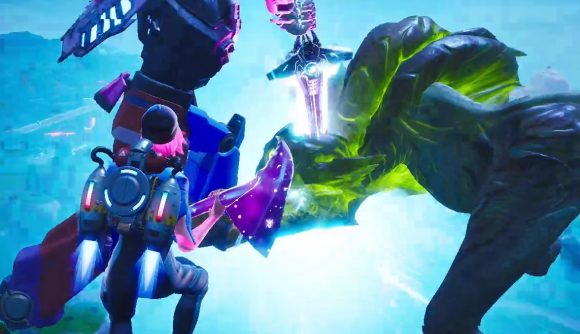 Season 9 of Fortnite came to an end Saturday with the much-anticipated battle between the giant mecha that’s been coming together at the Pressure Plant and the rampaging monster that emerged from under a mountain. The battle was brief, but it took several turns, and was in the end decisive. Team Mecha emerged victorious over Team Monster, as the ‘Doggus’ robot eventually split the skull of the ‘Cattus’ monster.

The monster emerged from the ocean on the northwest side of the island, casting its giant, baleful eye around. It fired a green laser beam across the landscape, which seems to have been what sparked the mecha in the volcano into action. Launching on jump jets, it cleared the volcano’s crater and unleashed a volley of missiles at the beast.

The monster shrugged these off, firing back at the robot with its eye-beam, and the bear-headed mecha charged forward as the monster took a moment to try to punch its way through the vault. The pair wrestled for a few moments, but eventually the mech fired its jump jets and sailed off the west side of the island, taking the monster with it and plunging into the sea.

There were a tense few seconds as the sounds of combat emerged from what sounded like under the island itself. Eventually, though, Doggus emerged from where the pair had dived into the water. But that apparent victory was short-lived, and the monster came crashing up onto shore as well, bounding after the mech and tearing off one of its arms. Things looked very bad for Doggus.

When all hope appeared lost, the mecha punched its remaining fist through the vault, pulling out a ball of pure energy that coursed through its arm. Fighting the monster back, it had enough time to grasp a structure in Neo Tilted, which it pulled from the ground, revealing it to be a massive sword.

Death metal: Check out the best robot games on PC

In the final clash, Doggus flung itself toward the Cattus monster, impaling its head on the sword and finally ending the battle.

And then the giant robot flossed. That’s right, before raising its one arm skyward and flying off into the night sky, it flossed. 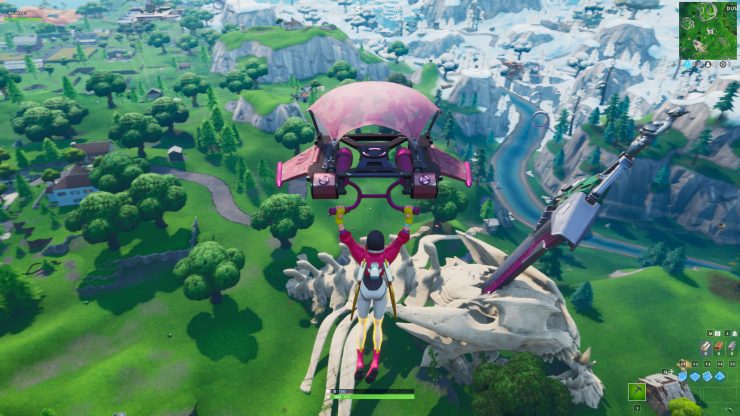 What’s left, if you head to the island now, is the monster’s gigantic skeleton, with Doggus’ sword still sunk through its skull.

It’s not at all clear what this means for Season 10, or for Season 9 for that matter. But the battle of the Fortnite titans is over, and it turns out this time, advanced technology beats eldritch horror.