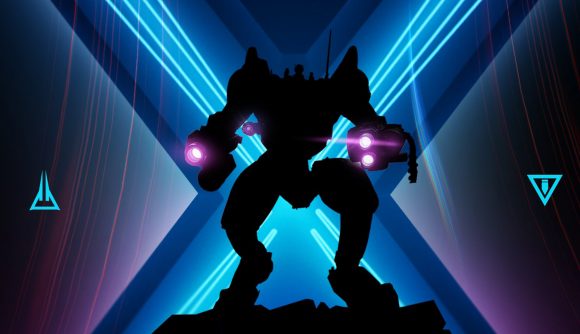 We’re on the eve of the next big update for Epic’s battle royale, and that means it’s time for a regular series of teasers hinting at the contents of Fortnite season 10. Yesterday, we saw a message to “think back” on Dusty Depot, which prepped players for a return to Fortnite’s simpler past. Now the new teaser suggests the exact opposite.

This time we’ve got the message “look forward,” along with the silhouette of a mech suit. There are also a pair of logos on the sides, and one of them is the same that adorns The Visitor – which suggests that character will have a part to play in all this.

The bigger thing is the mech, though, and that’s got some players worried about what’s coming on the Fortnite season 10 release date. What looks like a pilot is visible at the top of the suit, and that suggests that the mech will be a sort of new vehicle – and vehicles have been a controversial way of shaking up the game balance ever since they were first implemented.

Whatever the specifics of how the mech plays in, it seems likely that the new Fortnite season will bring in a collection of items and features from the game’s past and future.

Fortnite’s kaiju-mecha battle might have been a sign of things to come, though the Twitch audience was not there as it had been in the past. We’ll see what Epic has in store on August 1.